Bring It On: The Complete Story of the Cheerleading Movie That Changed, Like, Everything (No, Seriously) (Hardcover) 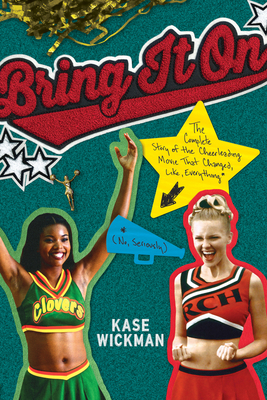 Bring It On: The Complete Story of the Cheerleading Movie That Changed, Like, Everything (No, Seriously) (Hardcover)


Not On Our Shelves—Ships in 1-5 Days
Featuring dozens of interviews with the cast and crew, fans of the franchise, film scholars, former and current cheerleaders, fellow filmmakers, and more.

Gabrielle Union, Kirsten Dunst, and Eliza Dushku have all risen to fame since their performances in the original cheer classic, but boldface names like Solange Knowles, Rihanna, Hayden Panetierre, Ashley Tisdale, and more also appeared in Bring It On films. The first-time director who helmed the movie, Peyton Reed, now has multiple Marvel smash hit films under his belt.

Not bad for a movie that almost didn’t get greenlit in the first place—but went on to win the box office its opening weekend, gross more than $90.45 million worldwide, and spawn a half-dozen sequels, a Tony-nominated musical, and a whole new genre of female-led films.

With the support of the filmmakers and producers, author and pop culture expert Kase Wickman accessed Universal's archives and conducted new interviews with cast, crew, and more for a full reveal of all the stories fans will love in this complete history and examination of the legacy of the greatest cheerleading movie almost never made.

Beyond its 20th anniversary, the legacy of Bring It On endures. It’s time we all understood how it changed, like, everything.
Kase Wickman is a writer, journalist, and creative who has been on staff at MTV News, the New York Post, the Boston Globe, and the Huffington Post. Her work has also appeared in Vanity Fair, New York Magazine, Cosmopolitan, Village Voice Media, and The Awl. Kase specializes in long-form journalism, quirky subjects and subcultures, and women in entertainment. When she's not writing, she spends time crafting, baking, and exploring the best corners of New York and New Jersey with her husband, Christopher Rosen, and daughter.

"The time to call Bring It On what it’s always been—the greatest sports movie ever!—is now. The book to do it is in your hands. Put the itch in your spirit fingers and Bring It On!" —Tony Reali, host, ESPN’s Around the Horn

"Kase Wickman has written a smart and utterly delicious book about a beloved teen movie that treated cheerleading with the respect it deserves. Told with wit, verve, and meticulous research, this fascinating portrait of Bring It On will delight film buffs and fans of the cult classic. I loved it!" —Erin Carlson, author of I’ll Have What She’s Having: How Nora Ephron’s Three Iconic Films Saved the Romantic Comedy and Queen Meryl


“Through meticulous research and masterful writing, Kase Wickman delves into the making of Bring It On and its legacy with the sparkling bubblegum energy of a squad of cheerleaders. An incredibly fun read that will leave a lasting impression, just like the film it explores.” —Vivian Ho, author of Those Who Wander: America's Lost Street Kids

"You've already won by picking up a book about the greatest cheerleading epic ever, but Kase Wickman's obsession with Bring It On makes it nearly impossible to put this book down once you start it. This is pop culture reporting at its finest." —Jason Diamond, author of The Sprawl and Searching for John Hughes

"Kase Wickman is a funny, sharp, and incisive chronicler of pop culture. A must-read for not only fans of this iconic movie, but all film buffs who want this inside scoop on how cinematic magic is made." —Jessica Goodman, New York Times bestselling author of They'll Never Catch Us, They Wish They Were Us, and The Counselors


"Though Wickman succeeds in demonstrating that the film resonates with an audience that extends beyond cheerleaders and teen girls, she also conveys how it felt to see Bring It On for the first time when she was 12: “I firmly believe that the magnetic pull of Kirsten Dunst and Gabrielle Union combined is more than any human can withstand.” Readers will revel in this nostalgic look at a pop culture phenomenon."  — Publishers Weekly

"Given the fact that Vanity Fair editor Wickman has assembled all the film’s players to talk to her for her memorandum, I dare say she’s not the only one talking about Bring It On " — Shondaland

"This book is a definitive history of the film's creation and cultural impact. While readers don’t need to have seen Bring It On to enjoy it, the film’s fans will read the upbeat tale in droves ... Like the film that inspired it, this book is a lesson in cultural optimism." — Booklist