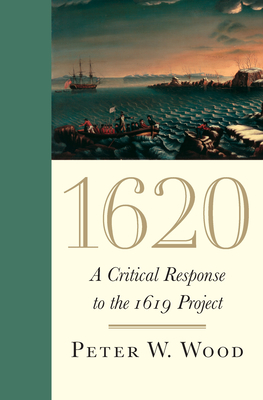 Peter Wood argues against the flawed interpretation of history found in the New York Times' 1619 Project and asserts that the true origins of American self-government were enshrined in the Mayflower Compact in 1620.

"1620 is a dispassionate, clear reminder that the best in America's past is still America's best future." --Amity Shlaes, chair, Calvin Coolidge Presidential Foundation

"Peter Wood's pushback against the 1619 Project is at once sharp, illuminating, entertaining, and profound." --Stanley Kurtz, senior fellow, Ethics and Public Policy Center

When and where was America founded? Was it in Virginia in 1619, when a pirate ship landed a group of captive Africans at Jamestown? So asserted the New York Times in August 2019 when it announced its 1619 Project. The Times set out to transform history by tracing American institutions, culture, and prosperity to that pirate ship and the exploitation of African Americans that followed. A controversy erupted, with historians pushing back against what they say is a false narrative conjured out of racial grievance.

This book sums up what the critics have said and argues that the proper starting point for the American story is 1620, with the signing of the Mayflower Compact aboard ship before the Pilgrims set foot in the Massachusetts wilderness. A nation as complex as ours, of course, has many starting points, most notably the Declaration of Independence in 1776. But the quintessential ideas of American self-government and ordered liberty grew from the deliberate actions of the Mayflower immigrants in 1620. Schools across the country have already adopted the Times' radical revision of history as part of their curricula. The stakes are high. Should children be taught that our nation is a four-hundred-year-old system of racist oppression? Or should they learn that what has always made America exceptional is our pursuit of liberty and justice for all?
Peter W. Wood is president of the National Association of Scholars. A former professor of anthropology and college provost, he is the author of several books about American culture, including Diversity: The Invention of a Concept (2003) and A Bee in the Mouth: Anger in America Now (2007). He is editor-in-chief of the journal Academic Questions and a widely published essayist. In 2019, he received the Jeane Kirkpatrick Prize for contributions to academic freedom.