Art in the After-Culture: Capitalist Crisis and Cultural Strategy (Paperback) 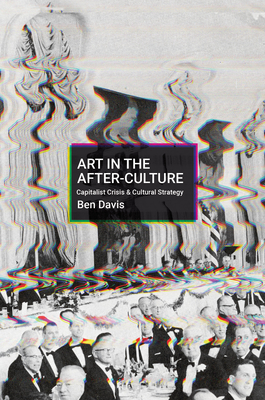 Art in the After-Culture: Capitalist Crisis and Cultural Strategy (Paperback)

"This kaleidoscopic collection will help you see and comprehend the world anew--which is, in my book, what good art should do."
--Astra Taylor

It is a scary and disorienting time for art, as it is a scary and disorienting time in general. Aesthetic experience is both overshadowed by the spectacle of current events and pressed into new connection with them. The self-image of art as a social good is collapsing under the weight of capitalism's dysfunction. In these incisive essays, art critic Ben Davis makes sense of our extreme present as an emerging "after-culture"--a culture whose forms and functions are being radically reshaped by cataclysmic events. In the face of catastrophe, he holds out hope that reckoning with the new realities of art, technology, activism, and the media, can help us weather the super-storms of the future.
Ben Davis has been artnet News's National Art Critic since 2016. He is the author of 9.5 Theses on Art and Class, and was an editor of The Elements of Architecture, which began as the catalogue to the 2014 Venice Architecture Biennial. Recent essays have appeared in the books Public Servants: Art and the Crisis of the Common Good and The Future of Public Space. His writings have been featured in The New York Times, New York Magazine, Slate, Adbusters, The Brooklyn Rail, e-Flux Journal, Frieze, The Village Voice, and many other venues. In 2019, Harvard 's Nieman Journalism Lab reported that he was one of the five most influential art critics in the United States, and the only one to write for an online publication.