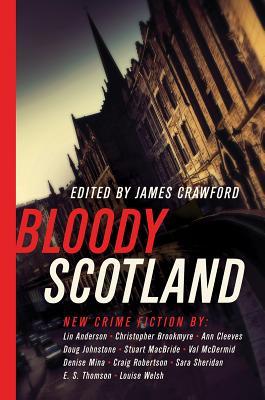 Twelve of Scotland’s most famous crime authors evoke the sinister side of the country’s architecture in stories that are by turns calculating, chilling, and redemptive.

Scotland has often been depicted as a land of haunting, misty moors and literary genius. But Scotland has also been a place of brutal crime, terrifying murder, child abuse, and bank robbery. Crime can strike anywhere. From the southern border to the Northern Isles, suspicion and suspense are never far away. Edinburgh, with its reputation for civility and elegance, has often been the scene of savagery; the dark streets of industrial Glasgow and Dundee have protected thieves and muggers, while the villages of coast and countryside hide murderous men and wild women.

Stellar contributors to Bloody Scotland include Val McDermid, Christopher Brookmyre, Denise Mina, Peter May, Ann Cleeves, Louise Welsh, Lin Anderson, Doug Johnstone, Craig Robertson, E. S. Thomson, Sara Sheridan and Stuart MacBride explore the thrilling potential of Scotland’s iconic sites and structures. From murder in a Hebridean blackhouse and a macabre tale of revenge among the furious clamour of an eighteenth century mill, to a dark psychological thriller set within the tourist throng of Edinburgh Castle and an ‘urbex’ rivalry turning fatal in the concrete galleries of an abandoned modernist ruin, this collection uncovers the intimate—and deadly—connections between people and places.

Prepare for a dangerous journey into the dark shadows of our nation’s architecture—where passion, fury, desire, and death collide.

James Crawford is Publisher at Historic Environment Scotland, the lead heritage organization that cares for over three hundred historic properties and holds Scotland's national collection of archaeology and architecture. He is the Chair of Publishing Scotland and the author of Fallen Glory: The Lives and Deaths of History's Greatest Lost Buildings (Picador). He lives in Edinburgh.
A fine anthology of original crime stories. Fans of contemporary Scottish crime fiction will be well pleased.

Superb. As the title suggests, murder and mayhem ensue. But there is so much more, including revenge, retribution, redemption, horror, and humor. Perfect for reading during a long winter’s evening by a fire with a wee dram of a favorite single malt in hand, these stories will transport mystery lovers to an unforgettable landscape.

Like the most
wonderful box of chocolates, this anthology delivers treat after treat, each

with a different but
harmonious flavour heightening the experience. A dozen great writers.