The Shadows of Men: A Novel (Wyndham & Banerjee Mysteries) (Hardcover) 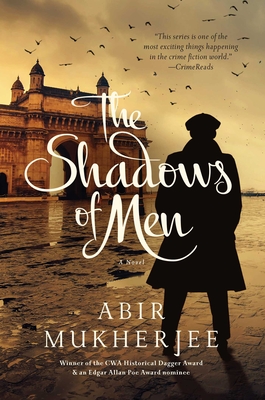 The Shadows of Men: A Novel (Wyndham & Banerjee Mysteries) (Hardcover)

When a Hindu theologian is found murdered in his home, the city is on the brink of all-out religious war. Can the officers of the Imperial Police Force—Captain Sam Wyndham and Sergeant “Surrender-Not” Banerjee—track down those responsible in time to stop a bloodbath?

Set at a time of heightened political tension, beginning in atmospheric Calcutta and taking the detectives all the way to bustling Bombay, the latest instalment in this remarkable series presents Wyndham and Banerjee with an unprecedented challenge. Will this be the case that finally drives them apart?
Abir Mukherjee is the author of the award-winning Wyndham & Banerjee series of crime novels set in Raj-era India. He has won the CWA Historical Dagger and the Wilbur Smith Award for Adventure Writing, and has been shortlisted for the CWA Gold Dagger, the HWA Gold Crown, and the Edgar Allan Poe Award. His novels include A Rising Man, A Necessary Evil, Smoke and Ashes, and Death in the East. Abir grew up in Scotland and now lives in Surrey, England.
“Mukherjee, as he has in previous series installments, paces this story with sure-footed ease.”
— Sarah Weinman

"Abir Mukherjee skillfully delivers an evocative look at the politics and culture of India in 1923 in this superb thriller."
— Oline Cogdill

“The pacing and twists are among the author’s best work. This is a sterling example of a riveting whodunit plot coupled with a vivid portrayal of a seminal historical moment.”
— Publishers Weekly (starred)

“From the first suspect to the eventual criminal reveal, few do it better than Abir Mukherjee and his Wyndham and Banerjee series.”
— Esquire UK

"Keeps readers dead center in the melee, while at the same time poised on the edges of their seats."
— BookPage

“This fast-paced story provides both a lot of suspense and a bit of sociology to season it. The Shadows of Men is a fine addition to this addictive series, and I am eagerly looking forward to the next installment.”
— Historical Novels Review

“Mukherjee’s ongoing series is one of the most exciting things happening in the crime fiction world… Mukherjee provides another exhilarating and erudite story.”
— CrimeReads

"In his superior third mystery, Mukherjee, who only gets better and better with each book, has established himself as a leading historical mystery writer."
— Publishers Weekly (starred)

"A phenomenal historical mystery. Thrilling and evocative, darkly funny and surprisingly touching. Mukherjee’s prose is so sharp that the setting feels immediate and vital.”
— Criminal Element

"Mukherjee’s amazing grasp of the social conventions and mores of both the British and Indians during the Raj period gives authenticity to this historical mystery. Historical mystery buffs will love this novel."
— Library Journal (starred)