Queen of Our Times: The Life of Queen Elizabeth II (Hardcover) 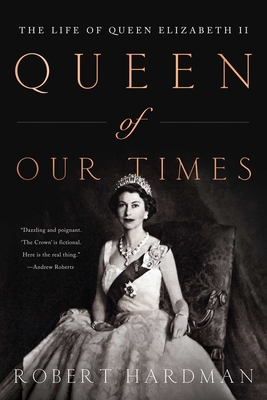 Queen of Our Times: The Life of Queen Elizabeth II (Hardcover)


Backordered
The definitive portrait of Queen Elizabeth II by a renowned royal biographer.

As seen on Good Morning America, CNN, and the BBC

Even with her recent passing at age ninety-six, she remains a twenty-first century global phenomenon commanding unrivalled respect and affection. Sealed off during the greatest peacetime emergency of modern times, she has stuck to her own maxim: "I have to be seen to be believed."

Robert Hardman, one of Britain’s most acclaimed royal biographers, now wraps up the full story of one of the undisputed greats in a thousand years of monarchy. Hardman distills Elizabeth's complex life into a must-read study of dynastic survival and renewal. It is a portrait of a world leader who remains as intriguing today as the day she came to the Throne at age twenty-five.

With peerless access to members of the Royal Family, staff, friends, and royal records, Queen of Our Times brings fresh insights and scholarship to the modern royal story. There will be no more thorough, more readable, more original book on Elizabeth II as we celebrate a life and reign that, surely, will never be equaled.
Robert Hardman is a leading author, commentator, and film-maker on royal life in Britain. He is the author of Her Majesty and Queen of the World, both available from Pegasus Books. He writes for the Daily Mail in London.
“The essential authoritative biography of the Queen that everyone needs to read. Queen of Our Times is packed with new research, gripping details and telling anecdotes on every page, equally masterful on matters high and low, power and family.  Hardman not only explains her; he defines her and her epoch.”
— Simon Sebag Montefiore, New York Times bestselling author of The Romanovs

“This is a beautifully crafted, deeply informed, and rounded portrait of the gold standard monarch and the age to which she has given her name. Robert Hardman’s Queen of Our Times has depth feel and insight in abundance.”
— Professor Peter Hennessy, winner of the Orwell Prize

“Rich in new material, wit, and original thought. With intimate and unrivalled access to those who really know the story, Queen of Our Times not only gives us the real Elizabeth II, but it also reminds us, often movingly, that we are living through one of history’s greatest reigns.”
— Andrew Roberts, New York Times bestselling author of The Last King of America