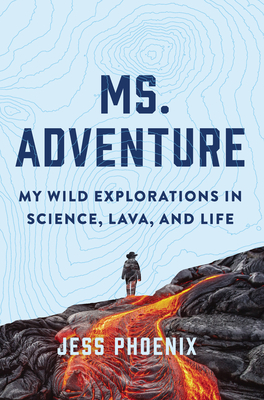 
Special Order—Subject to Availability
"Jess Phoenix's work encompasses science and representation in such a delightful melding that it could only come from as spry and playful a soul as hers! Open this book and jump into the volcano!" —Patton Oswalt

As a volcanologist, natural hazards expert, and founder of Blueprint Earth, Jess Phoenix has dedicated her life to scientific exploration. Her career path—hard earned in the male-dominated world of science—has led her into still-flowing Hawaiian lava fields, congressional races, glittering cocktail parties at Manhattan’s elite Explorers Club, and numerous pairs of Caterpillar work boots. It has also inspired her to devote her life to making science more inclusive and accessible.

Ms. Adventure skillfully blends personal memoir, daring adventure, and scientific exploration, following Phoenix’s journey from reality television sites deep in Ecuadorian jungles to Andean glaciers, university classrooms to Death Valley in summer. She has even chased down members of a Mexican cartel to retrieve a stolen favorite rock hammer. Readers will delight in her unbelievable adventures, all embarked on for the love of science.


Jess Phoenix is the executive director and co-founder of the environmental scientific research organization Blueprint Earth. For over 12 years, she has been a volcanologist, an extreme explorer, and a professional field scientist. She ran for United States Congress in California to unseat a climate science-denying incumbent, running a true grassroots campaign with positions based in evidence and fact. She is a Fellow in the Explorers Club and Royal Geographical Society, a featured scientist on the Discovery and Science Channels, and an invited TEDx speaker.

“The sheer grit and tenacity displayed in Jess Phoenix’s stories ensure their grip on the reader’s attention. Geology and adventure enthusiasts will have a blast.” —Publishers Weekly

“Jess Phoenix’s journey has been tempered by volcanic fire, colored by international adventure, molded by a cast of champions and antagonists, and catalyzed by the revelatory nature of science itself. Her fantastical origin story—from a student of history to a polymathic, science-proselytizing rebel—is the very definition of atypical; a polemic against a life of comforting, forgettable ordinariness and a paean to the extraordinary combination of persistence and curiosity.” —Dr. Robin George Andrews, Volcanologist and Science Journalist

“Geography itself is the unlikely hero of this exuberant memoir. Whether she is peeking into the top of an active volcano or trying to outwit the heat of the desert, Jess Phoenix brings her best game: the cunning of a detective, the soul of a poet and the open mind of a true explorer. It is pure joy to see the world through her endlessly curious eyes and to read about it in her crystal-clear prose.” —Madeleine H. Blais, winner of the Pulitzer Prize in Feature Writing and author of In These Girls, Hope Is a Muscle, a National Book Critics Circle Award finalist

“The best nonfiction reads like fiction, and that’s certainly true of Jess Phoenix’s Ms. Adventure… Phoenix is a skilled writer and gifted storyteller with a startlingly ability to weave telling details into her narrative.” —Mountain Times

“Not only will the inspiring spirit of the narrator captivate readers, but this book makes it clear why fields like volcanology matter today more than ever. Phoenix’s gritty adventures and love for scientific exploration are made fully accessible to all, no matter your scientific background.” —Shepherd Express