Nowhere Girl: A Memoir of a Fugitive Childhood (Paperback) 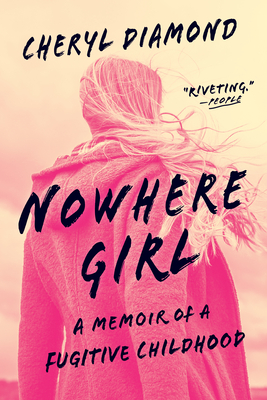 Nowhere Girl: A Memoir of a Fugitive Childhood (Paperback)

“This was such a deftly paced story; often incredibly touching and funny, yet heavily laced with intrigue and terror. No memoir has gripped me more since Kiese Laymon's Heavy.”
— Rob Fuller, Seminary Co-Op Bookstores, Chicago, IL

By the age of nine, I will have lived in more than a dozen countries, on five continents, under six assumed identities. I’ll know how a document is forged, how to withstand an interrogation, and most important, how to disappear . . .

To the young Cheryl Diamond, life felt like one big adventure, whether she was hurtling down the Himalayas in a rickety car or mingling with underworld fixers. Her family appeared to be an unbreakable gang of five. One day they were in Australia, the next in South Africa, the pattern repeating as they crossed continents, changed identities, and erased their pasts. What Diamond didn’t yet know was that she was born into a family of outlaws fleeing from the highest international law enforcement agencies, a family with secrets that would eventually catch up to all of them.

By the time she was in her teens, Diamond had lived dozens of lives and lies, but as she grew older, love and trust turned to fear and violence, and her family—the only people she had in the world—began to unravel. She started to realize that her life itself might be a big con, and the people she loved, the most dangerous of all. With no way out and her identity burned so often that she had no proof she even existed, all that was left was a girl from nowhere.

Surviving would require her to escape, and to do so Diamond would have to unlearn all the rules she grew up with. Wild, heartbreaking, and often unexpectedly funny, Nowhere Girl is an impossible-to-believe true story of self-discovery and triumph.

Cheryl Diamond is now a citizen of Luxembourg and lives between there and Rome. Her behind-the-scenes account of life as a teenage model, Model: A Memoir, was published in 2008. Diamond´s second book, Naked Rome, reveals the Eternal City through the eyes of its most fascinating people. Her new book, Nowhere Girl: A Memoir of a Fugitive Childhood, is available now.

"A riveting tale of trauma and resilience."
—People

“Like Tara Westover’s Educated, Cheryl Diamond’s memoir tells the harrowing story of how crippling a childhood can be under the despotic narcissistic rule of a controlling father . . . Diamond has a powerful story to tell, and she tells it well, creating strong characters and settings, describing the complicated motivations of her parents and older siblings, all while conveying her yearning for ‘normalcy,’ whatever that is.”
—New York Journal of Books

“A shocking rollercoaster ride of a story that shares secrets of life on the run but also asks big questions about what family means and who we truly are, no matter what the name on a passport might say.”
—Town Country

“This memoir is proof that truth really is stranger than fiction.”
—CrimeReads, “The Most Anticipated Crime Books of 2021: Summer Reading Edition”

“[A] remarkable true story of growing up in a family of outlaws.”
—Asheville Citizen-Times

“A beyond-harrowing memoir . . .  Diamond's tale might just be the most mind-blowing of them all.”
—Booklist, starred review

“Former teen model Diamond reveals a childhood both wacky and cliff-hanging in Nowhere Girl; on the run with an outlaw family, she lived in more than a dozen countries, on five continents, under six assumed identities, by age nine.”
—Library Journal

“Nowhere Girl beautifully captures the intensity, darkness, and fierce love within an uncompromising outlaw family. Diamond's odyssey would leave the most adventurous among us panting to keep up.”
—Alia Volz, author of Home Baked: My Mom, Marijuana, and the Stoning of San Francisco