Border Hacker: A Tale of Treachery, Trafficking, and Two Friends on the Run (Hardcover) 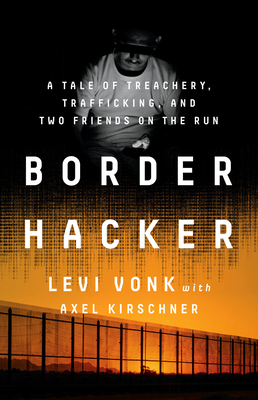 Border Hacker: A Tale of Treachery, Trafficking, and Two Friends on the Run (Hardcover)

An unlikely friendship, a four-thousand-mile voyage, and an impenetrable frontier—this dramatic odyssey reveals the chaos and cruelty US immigration policies have unleashed beyond our borders.

Axel Kirschner was a lifelong New Yorker, all Queens hustle and bravado. But he was also undocumented. After a minor traffic violation while driving his son to kindergarten, Axel was deported to Guatemala, a country he swore he had not lived in since he was a baby. While fighting his way back through Mexico on a migrant caravan, Axel met Levi Vonk, a young anthropologist and journalist from the US. That chance encounter would change both of their lives forever.

Levi soon discovered that Axel was no ordinary migrant. He was harboring a secret: Axel was a hacker. This secret would launch the two friends on a dangerous adventure far beyond what either of them could have imagined. While Axel’s abilities gave him an edge in a system that denied his existence, they would also ensnare him in a tangled underground network of human traffickers, corrupt priests, and anti-government guerillas eager to exploit his talents for their own ends. And along the way, Axel’s secret only raised more questions for Levi about his past. How had Axel learned to hack? What did he want? And was Axel really who he said he was?

Levi Vonk is an anthropologist, writer, and doctoral candidate. He lives between the US and Mexico.

“If this book were a novel, you’d say it was too implausible: an unlikely friendship, a dangerous journey, an apparent benefactor who turns out to be the opposite. But it’s all true, and Levi Vonk brings this extraordinary story to life with verve and zest.” ?

“Our twenty-first-century American hero is a deported hacker, cruelly cast out from the only country he’s ever known into the lawless labyrinth of statelessness, surviving on bravado and genius skill, while forming the most improbable partnership with a young string-bean ‘cracker’ academic whose generosity and courage never fails—and whose initial naivete is honed on this journey into the knowing, thoughtful voice of the chronicler of this book. Border Hacker is by turns heartbreaking, terrifying, hilarious, enraging, and inspiring. To say it humanizes contentious issues is a profound understatement.”

“Jack Kerouac, move over. In Border Hacker, Levi Vonk and Axel Kirschner’s unlikely friendship makes for the ultimate on-the-road buddy story. Suspenseful, intimate, and superbly told, Border Hacker is an amazing book, and as a tell-all account of the modern migrant experience, it kicks ass and takes no prisoners.”

“Combining Vonk’s in-depth reportage on U.S. border policy, predatory shelter operators, and the links between cartels, kidnappers, and the police with Kirschner’s first-person testimony, the two unspool a riveting and disturbing story. Readers will be aghast.”—Publishers Weekly

“An inspiring, timely border story…a significant addition to the literature on an ongoing humanitarian crisis…An engaging work of on-the-ground journalism that exposes root causes of a chronic problem.”—Kirkus Reviews

“Axel and Levi are likable characters, which makes rooting for them easy. This is a cultural anthropology story that’s well-told and eminently readable.”—The Bibliophage

“[A] thrilling, troubling, and wholly unique hybrid of confessional memoir and intrepid reportage…Border Hacker documents the phenomenon of migrant caravanning in the Americas more ably than any other book to my knowledge…is a singularly courageous book.”—Jacobin