The Transition Mindset: How Retiring from the NFL at the Peak of My Career Changed My Life (Hardcover) 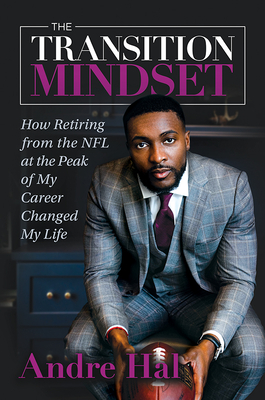 The Transition Mindset: How Retiring from the NFL at the Peak of My Career Changed My Life (Hardcover)

Life is multidimensional: it's all about transitioning from one phase to the next.

Andre Hal believed football was his life's calling--and for a long time, it was. After a successful collegiate run at Vanderbilt University, Andre kicked off his NFL career by being drafted to the Houston Texans. Soon, he was a starting safety and signed a new multiyear contract with the team in 2017. Andre was living out his wildest dreams on the field, and so he was wholly unprepared for the hard left turn his life took next.

In his fifth year playing for the NFL, the last thing Andre expected came to pass: he was diagnosed with Hodgkin's lymphoma. Refusing chemotherapy in favor of an experimental drug and changing his diet, Andre entered remission that same year. He returned to the field a few months later, only to retire in 2019 after his father passed away--and with him, Andre's love of football.

In the months and years since, Andre has had to chart a new course for himself, one that takes into account his new perspective and what it truly means to refocus and evolve. In this candid and unflinching reflection on his life, Andre pulls back the curtain on his time in the NFL and how he transitioned from one phase of life to another with the courage, commitment, and dedication to start anew.