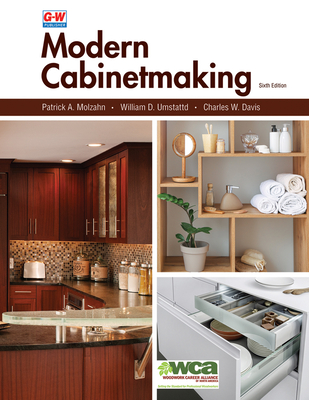 
Not On Our Shelves—Ships in 1-5 Days
Modern Cabinetmaking provides comprehensive coverage of cabinetmaking. The text provides an in-depth treatment of cabinetmaking, covering the industry, design and layout, materials, machining processes, cabinet construction, and finishing. This title also includes coverage of manufactured products and construction processes used in the cabinetmaking industry. Its rigorous subject treatment and new content correlate to the Woodwork Career Alliance (WCA) industry credentialing standards and SkillsUSA.
Patrick A. Molzahn has been a faculty member at Madison College, located in Madison, Wisconsin since 1998. He became the director of the Cabinetmaking and Millwork program in 2000. Prior to becoming an educator, Mr. Molzahn ran his own woodworking business for several years. A graduate of The School of the Art Institute of Chicago, he received degrees in both fine art and architecture. He is a founding board member of the Woodwork Career Alliance of North America. In 2018, he became the first individual to earn the WCA's highest honor, the Diamond Credential. His writings have appeared in numerous publications, including Woodshop News, Fine Woodworking, and Fine Homebuilding. He is also a contributing editor to the Architectural Woodwork Institute's ANSI Standards.Dr. William D. Umstattd was an Emeritus Associate Professor of Technology Education from The Ohio State University. He received his Bachelor of Science in Education degree with a major in Industrial Arts from Central Missouri State University, his Master of Arts degree with major emphasis in Education from the University of Northern Colorado, and his Doctor of Education degree in Industrial Education from Texas A&M University. Dr. Umstattd had thirty-six years of experience in the education field. He also served as a manuscript reviewer and assistant editor for trade journals and worked as a technical writer, preparing customer instructional manuals. Dr. Umstattd did committee work for, served on the board of directors of, and received a leadership award from the International Technology Education Association. He did committee work for and received an honorary life membership to the Council on Technology Teacher Education. He served as executive director and received a distinguished service award, a laureate award, and life membership from the Ohio Technology Education Association. He was a member of and received a distinguished service award and laureate citation from the Epsilon Pi Tau educational fraternity.Charles W. Davis taught courses in computer classes at the University of California Los Angeles and International Business Machines. He wrote user's guides to software products, articles in magazines, and reviewed numerous software publications. Mr. Davis attended the University of Michigan's School of Architecture and received his undergraduate degree from Wayne State University, Detroit. He later attended San Diego State University's Graduate School.