The Insurance Examination Under Oath Second Edition: A Tool Available to Insurers to Thoroughly Investigate Claims and Work to Defeat Fraud (Paperback) 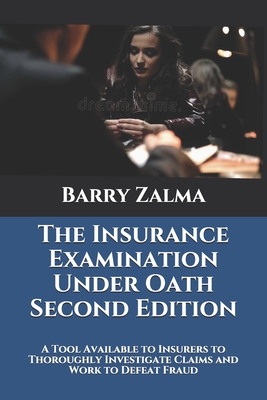 The Insurance Examination Under Oath Second Edition: A Tool Available to Insurers to Thoroughly Investigate Claims and Work to Defeat Fraud (Paperback)


Backordered
(This book cannot be returned.)
A Tool Available to Insurers to Thoroughly Investigate Claims and Work to Defeat FraudThe insurance Examination Under Oath ("EUO") is a formal type of interview authorized by an insurance contract. It is taken under the authority provided by the agreement of the insurer, when he, she or it acquires a policy of insurance, to submit to a condition of the insurance contract that compels the insured to appear and give sworn testimony at the demand of the insurer. Failure to appear and testify is considered a breach of a material condition. The EUO is conducted before a notary and a certified shorthand reporter who is present to give the oath to the person interviewed. The reporter will record the entire conversation and prepare a transcript to be read, reviewed, corrected and signed by the witness under penalty of perjury or by an oath taken before a notary or judge.The EUO is a tool only sparingly used by insurers in the United States. A professional insurer will only require an insured to submit to an EUO when a thorough claims investigation raises questions:1.about the application of the coverage to the facts of the loss, 2.the potentiality that a fraud is being attempted, or 3.to assist the insured in the obligation to prove to the insurer the cause and amount of loss. Although seldom used the EUO is an important tool needed by insurers when there is a question of coverage, destruction of evidence needed to prove a compensable loss or the amount of loss or evidence indicating the potential that a fraud is being attempted.The EUO and Legal Action provisions in an insurance policy are conditions precedent to an insured's ability to file suit, and that since the insured failed to substantially comply with the terms of those provisions, the appropriate remedy is dismissal without prejudice. The insured's failure to comply with these conditions does not bar his ability to bring suit to recover, but merely suspends his ability to bring suit until he has fully complied with those conditions.