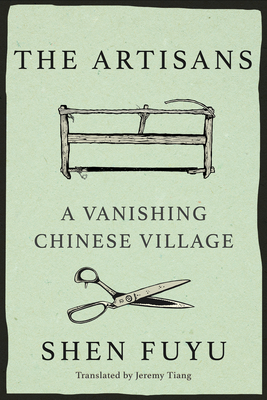 
In Stock—Click for Locations
Evoking Studs Terkel, Shen Fuyu delivers a rollicking deep dive into working life in a small village in rural China, tracing the last 100 years of history.

Born in Shen Village in Southeast China, Shen Fuyu grew up in a family of farmers. Years later, Shen, now a writer, returned to his hometown to capture the village’s rich history in the face of industrialization.

Through his own childhood memories and those of his ancestors, Shen resurrects the working life of Shen Village through interlinked stories of fifteen artisans as their lives intersect over the course of a century. While Shen's view of his hometown and his heritage is tinged with nostalgia, he does not romanticize it. Nor does he sugarcoat the backbreaking difficulty of life in rural China, but he still captures its small satisfactions and joys of loving one’s work with a great deal of care.

In an acerbic, earthy and unsparing style that swings from poignancy to comedy, sometimes within a single paragraph, Shen evokes the spirits of these workers--a bamboo-weaver and his beloved bull, a carpenter’s magical saw, the deserter who became the village lantern-maker and a rebellious woman who beats up her own kidnapper.

A reflection on the vicissitudes of small-town life during the epic shift from agricultural to industrial civilization, The Artisans vividly details the hardships, friendships and communal mythmaking of a disappearing community.
Shen Fuyu was born in Jiangsu, China in 1970. At the age of 18, he left home and drifted around the country, taking up a variety of jobs--porter, clerk, and schoolteacher--and began his writing career. He graduated from the Department of Chinese Language and Literature of Nanjing University in 1996, and has been working as a journalist for 20 years. Having published more than a dozen books, Shen is a full-time writer now and lives in Paris.
"[Shen Fuyu's] prose is steeped in contagious nostalgia, and he employs the universal language of emigration and exile, writing, 'I am now an orphan, lost in the big city.'"
—Farah Abdessamad, The Atlantic

"Beautifully written, with an almost mythic tone, each of these vignettes captures a piece of village life and custom during a tumultuous century in Chinese history."
—Booklist