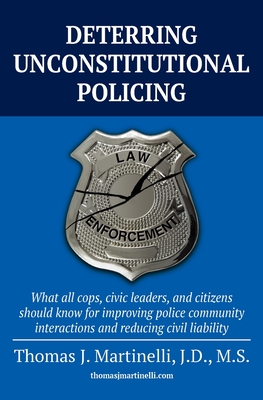 As punctuated through recent events, societal perceptions are that American policing continues to fail in its mission, to protect and preserve. Whether because of institutionalized prejudices that emphasize an "us versus them" mentality, reinforced through warrior training tactics, or poor recruiting, training, leadership and discipline, or a combination of these factors, the police profession continues to be challenged in its mission to deliver police services to the very citizens they swore to serve.

The challenge now is to recognize the profession's shortcomings regarding indifference, negligence, intentional acts and their cover-ups and the costs associated with such unconstitutional policing tactics. We must all learn from them, police and citizens alike, to better police service and citizen expectations. These are preventable, compensable acts of liability that are the direct result of inadequate legal training, poor supervision, dysfunctional police organizations and occupational prejudices against the disenfranchised, the marginalized and the less fortunate.

The profession must focus on comprehensively training the next generation of officers regarding these breaches of duty that dilute the public's trust in their law enforcement. As well, civic leaders and citizens must appreciate what and how costly unconstitutional police acts are and hold their agencies accountable for such malpractice. Such acts taint the profession, tarnish the public's perceptions, cost taxpayers exponentially in jury awards and settlements and deplete a department's morale.

Noble integrity is a training concept that defines and refines the balance between the constitutional limitations of badge authority with the guardian/warrior mindset, demonstrated through an oath-based training approach. It exemplifies the Intelligence Led Policing philosophies of self-policing, Unit policing, whisteblowing, audits and purges and hierarchical accountability. By referencing U.S. Supreme Court cases the reader is better educated in the nuances and standards of constitutional police procedures, coupled with police malpractice incidents that have cost officers their jobs, department's the public's trust and municipalities in crippling legal fees. "Doing the noble thing" must be the standard and mantra for 21st century policing to begin the police-community healing. But it is the police profession that must begin this healing process in changing its officers' mindset.

The challenge today is enlightening, thus empowering, all students of policing as to the legal and ethical standards our police officers must be held to in order to improve police-community relations and reduce municipal civil liability. This includes, but is not limited to discussions regarding Constitutional Law, Qualified Immunity, De-escalation measures, Violations of the Oath of Office, the temptations of the profession and national de-certification indexes. Quality of character matters in all facets of policing and is a defense to allegations of police malpractice and breaches of the oath.