Corpus Juris: The Order of the Defender of Arabia (Paperback) 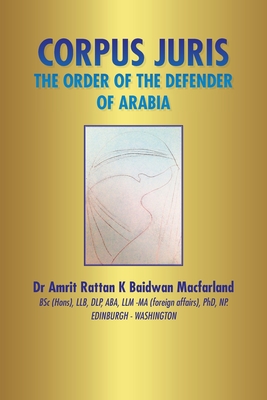 Corpus Juris: The Order of the Defender of Arabia (Paperback)


Not On Our Shelves—Ships in 1-5 Days
(This book cannot be returned.)
Dr Amrit Rattan K Baidwan- Macfarland presents three essays, the first is on Jurisprudence, entitled; what the law is and what the law ought to be. The complex nature of Jurisprudence based on the original natural justice theory, is examined as well as other theories, which have since been postulated by contemporary jurists. Supreme court decisions are cited to elucidate how natural justice principles engage modern cases today. The second part explores the concepts contained within the original Sanskrit Indian Arthashastra document on diplomacy, used for governance and international affairs, by two of the most famous emperors of India, Chandragupta Maurya, and his successor Ashoka. Finally, the contemporary debate on Israel, Palestine, Syria, Golan Heights, and Jerusalem is presented using key knowledge and contemporary concepts, established by historians and International relations academics. Dr Amrit Rattan K Baidwan-Macfarland - studied public law and governance, international relations, as part of her legal studies. She is a qualified scientist-Jurist- Lawyer, with an interest in public law and foreign affairs and trained in criminal litigation, human rights with her law firms in Scotland, and did a short secondment to India shadowing members of the Attorney General's department and gaining insights into commonwealth legal systems. She also undertook the study of American legal subjects involving comparative analysis, between two jurisdictions, Scots and American. She gained deep insights in theoretical and pragmatic foreign policy, relations, and affairs, from her academic engagements, with the universities in Scotland, as well as universities in Washington, USA. She enjoyed her research in conflict studies, peace, and security as part of the contemporary living history modules. Through these subjects, the evolving character of global and supra national institutions could be gleaned, as well as the interpretation of civic societies and international diplomacy, exploration of juristic constitutionalism at national and international levels, peace, conflict and the role of religious principles in the Arabian peninsula. AUTHORHOUSE - ACADEMIC PRESS.