Draw the Line: Jeff Traylor, The Gilmer Buckeyes, And a Season Deep in the Heart of East Texas (Paperback) 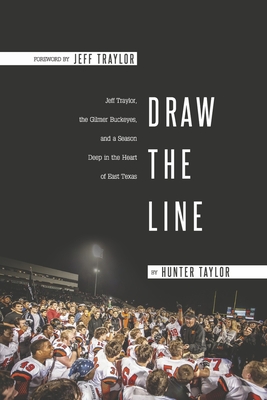 Draw the Line: Jeff Traylor, The Gilmer Buckeyes, And a Season Deep in the Heart of East Texas (Paperback)


Not On Our Shelves—Ships in 1-5 Days
East Texas is a land of tough, committed, resilient, hard-working people who love and take care of each other. Communities come together in churches, in schools, and in high school football stadiums all across this, often overlooked, region of the state. Football is more than a sport for young men in this part of the country that is primarily made up of small, country towns. It's a means of modeling character, and instilling discipline and pride—a way of life led by a brotherhood of coaches, each generation molding the next. On the football field and off, coaches lead not only their teams but also the towns, garnering respect for their dedication and will to succeed, sometimes against great odds. The ethos of East Texas is especially embodied in the story of Jeff Traylor, former head coach of the Gilmer Buckeyes, and his long-time coaching staff. A native son, Traylor and his band of brothers transformed the Buckeyes into champions, and in doing so help tell the story of the entire region's obsession with high school football, and undeniable influence on all levels of the sport. This is the story of the coach, the team, and the region.
Hunter Taylor currently lives in Oxford, MS, where he teaches at the University of Mississippi (UM). He grew up in East Texas as the son of a high school football coach, and later came back to the region to serve as a coach himself. Prior to joining faculty at UM, Taylor spent 10 total years as a basketball coach and an additional two years as a U.S. Senate staffer. In 2018, he was one of 59 leaders chosen from across the country to be a Presidential Leadership Scholar by the Bush Institute and the Clinton Foundation for his work in education. His wife, Brittany, is also an East Texas native and together they have three boys, Yates, Simms, and Knox. His next project is a children's book for them.Jeff Traylor is the head football coach at the University of Texas at San Antonio (UTSA). In 2021, Traylor led the UTSA Roadrunners to a 12-2 regular season and the Conference USA championship. Prior to becoming a college coach, Traylor served as head football coach for the Gilmer Buckeyes. In 15 seasons at the helm, the program captured three state championships and solidified Traylor as a Texas High School Football legend.