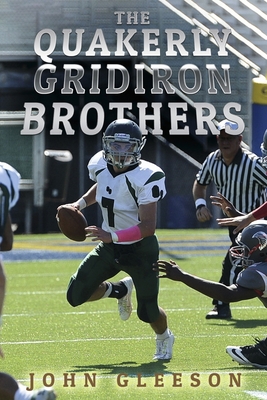 
Not On Our Shelves—Ships in 1-5 Days
A small school struggles to survive in the scholastic football world. George School, a Quaker boarding school in Bucks County, Pennsylvania, has maintained a football program since 1923. The Quakerly Gridiron Brothers describes the many trials and ultimate successes it has undergone since its inception. The story, told through the eyes of the former players, details the difficulties both philosophically and physically of competing in a high impact sport. It also details the positive growth and learning that takes place. The players' experiences vary but most agree that the camaraderie and bonding had a long-lasting impact on them. The book starts with the debate over the roll football plays in a Quaker school, passes through the war years, and winds up in the modern era of concussion awareness.
John Gleeson played three varsity sports when a student at George School. He was co-captain of the 1964 George School football team. He went on to earn a BA degree from Haverford College and a MALS degree from Dartmouth College. He taught English at George School from 1969 t0 2016, serving as English department chairman, dorm head, advisor, and coach. He spent the last 30 years as head coach of the football team. John also wrote a weekly sports column for a local Bucks County newspaper from 1977 to 2020 that earned several Keystone Press Awards. His other book is Sportscape, a gathering of some of his more successful articles.