Hidden Dangers of Sex without a Marriage Covenant: Satan's covert activities against the Born-Again (Paperback) 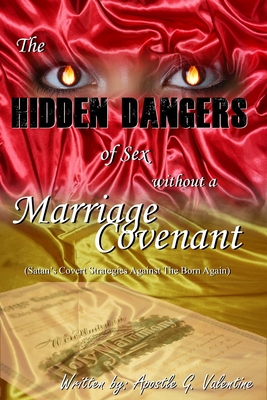 Hidden Dangers of Sex without a Marriage Covenant: Satan's covert activities against the Born-Again (Paperback)


Not On Our Shelves—Ships in 1-5 Days
(This book cannot be returned.)
The male and female body was so designed by the creator for procreation. In the covenant of marriage, sex gives each partner a legitimate way to emotionally indulge and enjoy each other sexually. The marriage covenant is important because it legitimizes sexually intimacy, which avoids the bastardization of children, inappropriate behavior by those who use sex to demoralize their victims, and negative claims to avoid parental responsibility. The institution of marriage is an appropriate way for the creation of a family. The Family gives children a sense of belonging, a safe environment to be nurtured, to grow, to be protected, to be enhanced, to be provided for and represented.Sex with a legal partner avoids the embarrassment so many women experience when they cannot identify who the father of their child is, and when and arbitrary sex partner denies responsibility for that child. Sex with a legal partner gives the child a home which is the foundation of society. Homeless, abandoned and non-caring parents are the catalyst for children without the guidance of a stable home to become law breakers and a problem in society.This is not true in all instances; even though some children were born and grew up in extremely harsh circumstances, they were able to crawl their way to the top of the ladder in society by persistent effort, because of their determination not to become victims of their environment. Individuals who have grown up in a divided, divorced, dysfunctional one parent home, or those who were abandoned to the foster care system, often perpetuate the same life-style as adults and when they become parents. When divorce becomes a generational dysfunction, the one parent household with its lack of structure and order is what determines what children continue to be and do when they become adults. Arbitrary sex with whosoever has become so normal that people seldom take into account not only the natural ramifications but the spiritual impact arbitrary sex has on those bound by that lifestyle. Sexual predators are in every segment of society; they are rich, they are poor, they are in the family, in the church, in the market place, in government, they have prominent platforms in society and government where they can intermingle with people and prey on the unsuspecting, and uninformed.A married man is supposed to protect his family from predators and along with his wife provide an environment of safety and love. Sexual violations should not take place in the home, when it does, then unwanted sex become a criminal act. The Institution of Marriage has been marred by selfishness, infidelity, abuse, irresponsibility, neglect, lack of love, deception, control and manipulation, but this does not mean that marriage in it purest sense is no longer vital to human relationships. the majority of law-abiding citizens who have come from godly, Christian families where good morals, a harmonious, loving relationship between husband, wife and children exists, is the foundation which testifies to the fact that marriage is an honorable institution.