John Aubrey, My Own Life (Hardcover) 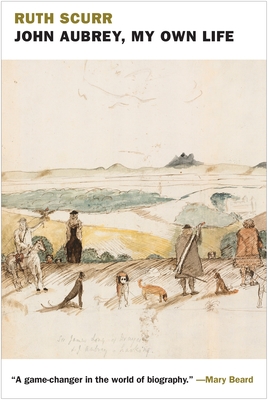 John Aubrey, My Own Life (Hardcover)


Special Order—Subject to Availability
“A game-changer in the world of biography.” —Mary Beard, The Guardian

Shortlisted for the Costa Biography Award

Born on the brink of the modern world, John Aubrey was witness to the great intellectual and political upheavals of the seventeenth century. He knew everyone of note in England—writers, philosophers, mathematicians, doctors, astrologers, lawyers, statesmen—and wrote about them all, leaving behind a great gift to posterity: a compilation of biographical information titled Brief Lives, which in a strikingly modest and radical way invented the art of biography.

Aubrey was born in Wiltshire, England, in 1626. The reign of Queen Elizabeth and, earlier, the dissolution of the monasteries were not too far distant in memory during his boyhood. He lived through England’s Civil War, the execution of Charles I, the brief rule of Oliver Cromwell and his son, and the restoration of Charles II. Experiencing these constitutional crises and regime changes, Aubrey was impassioned by the preservation of traces of Ancient Britain, of English monuments, manor houses, monasteries, abbeys, and churches. He was a natural philosopher, an antiquary, a book collector, and a chronicler of the world around him and of the lives of his friends, both men and women. His method of writing was characteristic of his manner: modest, self-deprecating, witty, and concerned above all with the collection of facts that would otherwise be lost to time.

John Aubrey, My Own Life is an extraordinary book about the first modern biographer, which reimagines what biography can be. This intimate diary of Aubrey’s days is composed of his own words, collected, collated, and enlarged upon by Ruth Scurr in an act of meticulous scholarship and daring imagination. Scurr’s biography honors and echoes Aubrey’s own innovations in the art of biography. Rather than subject his life to a conventional narrative, Scurr has collected the evidence—the remnants of a life from manuscripts, letters, and books—and arranged it chronologically, modernizing words and spellings, and adding explanations when necessary, with sources provided in the extensive endnotes. Here are Aubrey’s intricate drawings of Stonehenge and the ancient Avebury stones; Aubrey on Charles I’s execution (“On this day, the King was executed. It was bitter cold, so he wore two heavy shirts, lest he should shiver and seem afraid”); and Aubrey on antiquity (“Matters of antiquity are like the light after sunset—clear at first—but by and by crepusculum—the twilight—comes—then total darkness”). From the darkness, Scurr has wrested a vibrant, intimate account of the life of an ingenious man.
Ruth Scurr is a historian, writer, and literary critic. Her first book, Fatal Purity: Robespierre and the French Revolution, won the Franco-British Society Literary Prize, was long-listed for the Samuel Johnson Prize, short-listed for the Duff Cooper Prize, and chosen as one of the One Hundred Best Books of the Decade in The Times (London). She reviews regularly for The Times Literary Supplement, The Telegraph, the Financial Times, and The Wall Street Journal. She is a Fellow of the Royal Society of Literature and teaches history and politics at Cambridge University where she is a Lecturer and Fellow of Gonville and Caius College.
"Bold, innovative, and consistently absorbing, John Aubrey, My Own Life, manages the dual feat of dramatizing a brilliant biographer and reinterpreting the art of biography.” —Malcolm Forbes, The Weekly Standard

"The English biographer, naturalist, philosopher and convivial wit John Aubrey (1626-97) did not leave a diary behind, to the dismay of those who admire his writing about other people. In an ingenious new book titled 'John Aubrey: My Own Life,' the historian Ruth Scurr has made one for him, and it is a thoroughgoing delight. Ms. Scurr has rummaged through Aubrey’s letters, books and unpublished manuscripts. She has isolated his writing about his own life and set it in chronological order, modernizing spellings and adding discreet commentary when necessary...She has done the world a service in compiling 'John Aubrey: My Own Life.' This is a funny book, and a wise and moving one, that delivers to us a man in full." —Dwight Garner, The New York Times

"Displaying an admirable chutzpah as well as scholarly care and sensitivity, Cambridge historian Ruth Scurr actually relates Aubrey’s life using only his own words. In effect, she has mined his archival and printed work to fashion his own personal — and wildly entertaining — diary...Anyone who loves history or human idiosyncrasy will almost certainly love ‘John Aubrey, My Own Life.’” —Michael Dirda, The Washington Post

“A game-changer in the world of biography.” —Mary Beard, The Guardian, Best Books of the Year 2015

“My Own Life is light, ingenious, inspiring, a book to reread and cherish. The vigour and spirit on every page would delight John Aubrey, that most individual of thinkers and writers, who has found a biographer of originality and wit. It is reverent, charming, poignant: it is made of the same ingredients as its subject.” —Hilary Mantel

“[Scurr’s] book is composed as an invented diary, stitched together from Aubrey’s correspondence and manuscripts and details pulled from the “Brief Lives”…the conceit is daring and ingenious. The tone is pitch-perfect; the seam-work is invisible. Readers of the right temperament will treasure John Aubrey, My Own Life.” —Jeffrey Collins, The Wall Street Journal

"Scurr brings [John Aubrey] brilliantly to life by using surviving letters and manuscripts to craft the diary he never wrote…Scurr’s diary format allows us to watch him grow from a curious boy who “like[s] to think about the past” to a man quietly passionate about everything ancient...Indeed, the Aubrey whom Scurr recreates for us is as charming and entertaining as his “diary,” which Scurr has rendered accessible by modernizing spelling and word choices. This book is both a wonderful historical resource and a delight to read." —Publishers Weekly, starred review

"In her innovative life of the author of the immensely influential Brief Lives, sketches of most of
seventeenth-century England’s intellectual elite, Scurr creates a life-spanning diary out of Aubrey’s own words in his manuscripts and letters and as reported by contemporaries, arranging them “playingly” (as Aubrey said of his writing) but “carefully in chronological order"...the book bubbles with the energy and obsessions of the fussy, totally committed Aubrey...Quite the man, vividly present here." —Booklist

"A historian and literary critic offers a unique and revealing look at the life of English philosopher John Aubrey (1626-1697), told in Aubrey's voice in the form of a diary....A creative, engaging, and profoundly moving account of a man's fierce desire to discover, understand, and preserve.” —Kirkus (starred review)

“John Aubrey, My Own Life turns the notion of biography on its head, transforming a normally third person history into a lively first person account of seventeenth century Britain—an era when New World explorations collided with Old World beliefs, when apples were falling on Newton’s head, and axes were falling the heads of others…Scurr knits the threads of Aubrey’s own words with a sure hand, modernizing both a classical biographer and the classical notions of biography.” —Michael Barron, The Culture Trip

"What’s remarkable about this book is how contemporary so much of the 17th century appears through Aubrey’s telling, and how his writing, even (or especially) at its most self-deceptive, makes him seem so much like someone you know (or are). It’s a tremendous accomplishment and something that doesn’t even make you feel like you’re doing Serious Reading, but you still get the points anyway." —Alex Balk, The Awl

“Scurr has written Aubrey’s life in diary form, boiling down and modernizing his voluminous writings to produce a fascinating chimera of old and new. One gets the sense Aubrey himself would very much have appreciated the result, which brings him and his times to life.” —Matthew Wills, JStor Daily

“Another writer of brief lives, Lytton Strachey, feared that in our modern civilization John Aubrey would ‘never come into existence again.’ But that is exactly what he does in Ruth Scurr’s absorbing and imaginative biography. In these pages his purchase on posterity returns with all his ingenious visions and impulses. Scurr is no less a pioneer biographer than Aubrey himself.” —Michael Holroyd

“An audacious and successful attempt to write a biography in the subject’s own words. Scurr has ingeniously edited Aubrey’s swift, vivid prose into a coherent account of the life lived by one of the most interesting (and interested—in everything) writers of our most exciting century, the seventeenth. Irresistible.” —Philip Pullman, The Guardian

“To me this book is a delight and...it is the one that I would take with me to a desert island.” —David Aaronovitch, The Times (London)

“A delightful read about the ebb and flow of thoughts in one extraordinary man’s mind.” —Claire Harman, Evening Standard

“[A] genuinely remarkable work of biographical innovation. Using Aubrey’s own words, Oulipo-style, [John Aubrey: My Own Life] constructs the diary he never wrote and places a man so often seen as lurking on the margins and snapping up unconsidered trifles into substantial and melancholy figures. A biography brave enough to leave gaps is a very human and humane undertaking.” —Stuart Kelly, “Books of the Year” 2015, The Times Literary Supplement

“For me, the academic historian, Scurr’s experimental ‘act of scholarly imagination’ has already modified significantly my own historical understanding.” —Lisa Jardine, Financial Times

“Scurr’s judgment and scholarship in constructing Aubrey’s own account of events are so flawless that she allows us almost to forget that she is there.” —Alexandra Harris, The Guardian

“The marriage of [Aubrey’s] words and Scurr’s is so smoothly achieved that I have no idea where one leaves off and the other intervenes.” —Allan Massie, The Scotsman

“Scurr’s imaginative feat of retrieval has produced a perfect book for dipping into when you want a taste of what it was like to be alive in the 17th century.” —John Carey, The Sunday Times

“It is a testament to [Scurr’s] skill that you quickly stop thinking about technique and instead slip happily into the company of the character she has created. The wealth of research and the seams between imagination and reality disappear from view. This is truly selfless biography.” —Daisy Hay, The Daily Telegraph

“Drawing on [Aubrey’s] manuscripts and letters, [Scurr] has fashioned, as chronologically as possible, an autobiography in the form of the diary that Aubrey never wrote. It fits him perfectly...Scurr has done him proud.” —The Economist

“It is a bold and brilliant experiment, but it suits the fragmentary nature of Aubrey’s work and life.” —Andrew Brown, The Sunday Telegraph