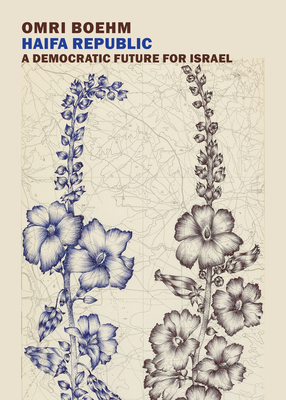 
On Our Shelves Now at:
A provocative argument for a new way of seeing Israel, Zionism, and the two-state solution.

Haifa Republic: A Democratic Future for Israel is an urgent wake-up call. The philosopher Omri Boehm argues that it is long past time to recognize that there will not be a two-state solution to the conflict between Israel and the Palestinian people. After fifty years, Israel’s occupation of the West Bank constitutes annexation in all but name, even as the legitimate claims of the Arab population, soon to be a national majority, remain unaddressed. Meanwhile, daily life goes on under conditions rightly likened to apartheid. For liberals in Israel and America to continue to place their hopes in a two-state solution is a form of willful and culpable blindness, especially now that Israeli leaders across the political spectrum have begun to speak of ethnic cleansing. A catastrophe is in the making.

But Haifa Republic also offers grounds for hope. Catastrophe can be averted, Boehm contends, by reconfiguring Israel as a single binational state in which Palestinians and Jews both possess human rights and equal citizenship. The original Zionists—Theodor Herzl, Ze’ev Jabotinsky, and, early in his career, David Ben-Gurion—all advocated such a federation, and as prime minister, Menachem Begin successfully submitted a kindred plan to the Knesset. A binational federation offers a last chance for the two peoples who call Palestine home to live in peace and mutual respect and to have a truly democratic future in common.
Omri Boehm is a professor of philosophy at the New School for Social Research. He is the author of The Binding of Isaac: A Religious Model of Disobedience and Kant’s Critique of Spinoza. His writings on Israeli politics and culture have appeared in Haaretz, Die Zeit, The New York Times, and elsewhere.
“Omri Boehm attempts to reconcile Israel’s history with the demands of justice. His ideas are radical just as much as they are hopeful. Boehm is one of the most important philosophers of his generation.” —Susan Neiman

“[The] most important book on the solution to the Israeli-Palestinian conflict . . . that has appeared in recent years.” —Micha Brumlik, Die Zeit

“Expansive. . . [Haifa Republic is] a life-raft for the followers of a liberal Zionism now floating aimlessly off the coastal city.” —Shaul Magid, +972 Magazine

“[Haifa Republic is a] brave and sleek polemic. . . Boehm makes a stimulating case for the fact that Zionism’s fathers (including Menachem Begin!) would have agreed with Israel being ‘a joint, sovereign state.’ . . . Boehm’s agile blade, swung in the cause of recognizing reality, cuts both ways, and that lends his book its persuasiveness.” —Bill Marx, The Arts Fuse