Mrs. Palfrey at the Claremont (Paperback) 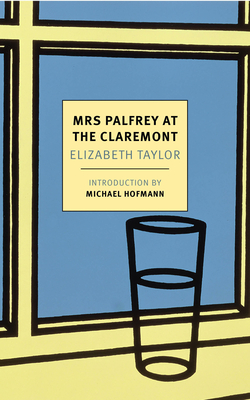 Mrs. Palfrey at the Claremont (Paperback)

By Elizabeth Taylor, Michael Hofmann (Introduction by)
List Price: $16.95
Our Price: $15.95
(Save: $1.00 6%)
On Our Shelves Now at:
A blackly humorous story of loneliness, deception, and life in old age by one of the most accomplished novelists of the twentieth century.

On a rainy Sunday afternoon in January, the recently widowed Mrs. Palfrey moves to the Claremont Hotel in South Kensington. “If it’s not nice, I needn’t stay,” she promises herself, as she settles into this haven for the genteel and the decayed.

“Three elderly widows and one old man . . . who seemed to dislike female company and seldom got any other kind” serve for her fellow residents, and there is the staff, too, and they are one and all lonely.

What is Mrs. Palfrey to do with herself now that she has all the time in the world? Go for a walk. Go to a museum. Go to the end of the block. Well, she does have her grandson who works at the British Museum, and he is sure to visit any day.

Mrs. Palfrey prides herself on having always known “the right thing to do,” but in this new situation she discovers that resource is much reduced. Before she knows it, in fact, she tries something else.

Elizabeth Taylor’s final and most popular novel is as unsparing as it is, ultimately, heartbreaking.
Elizabeth Taylor (1912–1975) was an English short-story writer and novelist. She held a variety of positions, including librarian and governess, before marrying a businessman in 1936. Nine years later, her first novel, At Mrs. Lippincote’s, appeared. She would go on to publish eleven more novels, including Angel, A Game of Hide and Seek, and A View of the Harbour (all available from NYRB Classics); several volumes of short stories, many of which are collected in You’ll Enjoy It When You Get There (NYRB Classics); and a children’s book, Mossy Trotter.

Michael Hofmann is a German-born, British-educated poet and translator. He is the author of two books of essays and five books of poems, most recently One Lark, One Horse. He has translated several books for NYRB Classics, including Alfred Döblin’s Berlin Alexanderplatz, Jakob Wassermann’s My Marriage, and Gert Ledig’s Stalin Front, Kurt Tucholsky's Castle Gripsholm, and edited The Voyage That Never Ends, an anthology of writing by Malcolm Lowry.
"It’s funny, compassionate and searing on the subject of loneliness in later life." —Sarah Gilmartin, The Irish Times

"Long described as underrated. . . Taylor has increasingly been acknowledged as a major writer. . . A comic novel about the elderly, middle-class residents of a London hotel. . . [it] offers an unsparing, materialist critique of post-imperial Britain. . . Mrs Palfrey at the Claremont, in other words, isn’t simply the story of one woman’s crisis; Mrs Palfrey’s condition is the condition of England." —Ryan Napier, Jacobin

“Elizabeth Taylor's exquisitely drawn character study of eccentricity in old age is a sharp and witty portrait of genteel postwar English life facing the changes taking shape in the 60s . . . Mrs. Palfrey at the Claremont is, for me, her masterpiece.” —Robert McCrum, “The 100 Best Novels Written in English,” The Guardian

“A darkly funny, unsentimental look at the loneliness of old age and the vicissitudes of human attachment.” —Hilma Wolitzer, The Guardian