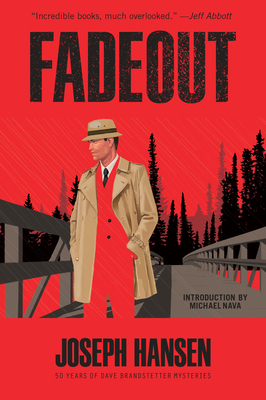 This is book number 1 in the A Dave Brandstetter Mystery series.

With a new Introduction by Michael Nava.

Published fifty years ago, a time when being gay was illegal in 49 out of 50 states, Joseph Hansen’s first Dave Brandstetter novel shattered stereotypes and redefined the Private Eye novel as we know it.

Five decades after its original landmark publication, Joseph Hansen’s Fadeout is as fresh and important as ever. Preceded only by a handful of gay protagonists in crime fiction, Hansen’s Dave Brandstetter, a ruggedly handsome World War II vet with a quick wit, faultless moral compass, and endless confidence, shattered stereotypes and won over a large reading audience, a feat previously considered impossible for queer fiction.

Set in the mid-1960s, Fadeout centers on the disappearance of a southern California radio personalitynamed Fox Olson. A failed writer, Olson finally found success as a beloved folksinger and wholesome country raconteur with a growing national audience. The community is therefore shocked when Olson’s car is found wrecked, having been driven off a bridge and swept away in a fast-moving arroyo on a rainy night. A life insurance claim is filed by Olson’s widow and the company holding the policy sends their best man to investigate. The problem is that Olson’s body was never found. Not in the car. Not further down the river. As Dave Brandstetter begins his investigation he quickly finds that none of it adds up.
Joseph Hansen (1923–2004) was the author of more than twenty-five novels, including the twelve groundbreaking Dave Brandstetter mystery novels. The winner of the 1992 Lifetime AchievementAward from the Private Eye Writers of America, Hansen was also the author of A Smile in His Lifetime, Living Upstairs, Job's Year, and Bohannon's Country. He was a two-time Lambda LiteraryAward-winner.
PRAISE FOR THE DAVE BRANDSTETTER NOVELS

"In an auspicious event for mystery readers, Syndicate is reprinting all 12 of Joseph Hansen’s pioneering Dave Brandstetter novels over 12 months. “Fadeout,” the first in the series featuring the comfortably gay World War II vet and L.A. insurance investigator, was published in 1970. As Michael Nava points out in his insightful new introduction, that’s when gay sex was a criminal act in 49 of the 50 states. Through grit and sheer talent, Hansen found a wide audience… Crime fiction fans who don’t know Hansen’s work are in for a treat."
—The Washington Post

"I can only applaud the republication of Joseph Hansen's Dave Brandstetter books. I've increasingly come to regard the phrase 'an important writer of crime fiction' as oxymoronic, but if one's going to use the label, Hansen's not an unreasonable bearer of it."
—Lawrence Block

“Joseph Hansen is not only one of America’s best mystery writers, he is a great American writer. Period. Full stop.”
—Michael Nava

"The Brandstetter books are classics of the private eye genre... It's great to see them available again."
—Peter Robinson

"One of the 20th century’s most memorable investigators. With this re-issue, a new generation will experience both Hansen’s rich writing and taut plotting, and a compelling view of how life may have, in many ways, changed for the better."
—New York Journal of Books

“First published over fifty years ago now, Hansen’s novels are not just clever and compelling stories, but to my mind they are also a feat of incredible bravery. I wish I’d discovered him sooner.”
—Russ Thomas, CrimeReads

“Hansen is one of the best we have… [He] knows how to tell a tough, unsentimental, fast-moving story in an exceptionally urbane literary style.”
—New York Times Book Review

“After forty years, Hammett has a worthy successor.”
—The Times (London)

“Mr. Hansen is an excellent craftsman, a compelling writer.”
—The New Yorker

“Apart from its virtues as fiction, Hansen’s Early Graves is a field correspondent’s breathtaking dispatch from a community in the midst of disaster.”
—Time

“Read in the order written, [the Brandstetter mysteries] are remarkably linked through symbol, incident, and character, to the point that one sees them as a single, multi-volume novel, by which one may learn a great deal about what it means to be homosexual and male in modern America.”
—The New Republic

“Hansen is quite simply the most exciting and effective writer of the classic California private-eye novel working today.”
—Los Angeles Times

“No one in the history of the detective novel has had the daring to do what Joseph Hansen has done: make his private eye a homosexual…who is both a first-rate investigator and one of the most interest series characters in the history of the genre.”
—David Geherin, The American Private Eye

“The first thing I ever read by Joseph Hansen was Fadeout (1970). It’s the seminal novel in a mystery series about a smart, tough, uncompromising insurance investigator by the name of David Brandstetter. He is a Korean War vet and ruggedly masculine. He’s educated, principled, compassionate — but willing and able to use violence when nothing else works. He represents the (then) new breed of PI — the post–World War II private investigator. There are no bottles of rye in Dave’s desk, there are no sleazy secrets in his past, and the dames don’t much tend to throw themselves at him. He is neither tarnished nor afraid. Oh, and one other thing. He’s gay…. He was not the first gay detective to hit mainstream crime fiction, but he was the first normal gay detective, and that — as the poet said — has made all the difference.”
—Josh Lanyon, from The Golden Age of Gay Fiction