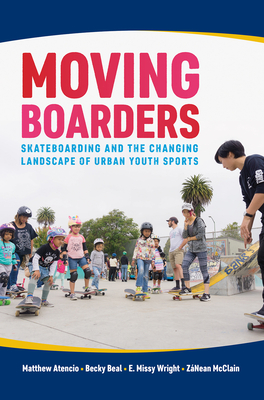 
Special Order—Subject to Availability
Once considered a kind of delinquent activity, skateboarding is on track to join soccer, baseball, and basketball as an approved way for American children to pass the after-school hours. With family skateboarding in the San Francisco Bay Area as its focus, Moving Boarders explores this switch in stance, integrating first-person interviews and direct observations to provide a rich portrait of youth skateboarders, their parents, and the social and market forces that drive them toward the skate park.

This excellent treatise on the contemporary youth sports scene examines how modern families embrace skateboarding and the role commerce plays in this unexpected new parent culture, and highlights how private corporations, community leaders, parks and recreation departments, and nonprofits like the Tony Hawk Foundation have united to energize skate parks—like soccer fields before them—as platforms for community engagement and the creation of social and economic capital.

Matthew Atencio is associate professor of kinesiology and codirector of the Center for Sport and Social Justice at California State University, East Bay.

Becky Beal is professor of sociology and philosophy of sport at California State University, East Bay, and the author of Skateboarding: The Ultimate Guide.

E. Missy Wright is assistant professor of kinesiology and codirector of the Center for Sport and Social Justice at California State University, East Bay.

ZáNean McClain is associate professor of kinesiology at California State University, East Bay.
“For decades, skateboarders have considered themselves outside of mainstream culture. The skateboard, for these folks, is an emblem of independence, liberty, and creative provocation. As a lifelong skateboarder, I found Moving Boarders to be an accurate reflection of skateboarding’s cultural qualities. More than ever, skateboarding presents a healthy—if sometimes subversive—option for today’s youth. Moving Boarders is a vital account of what works in skateboarding.”
—Peter Whitley, Programs Director, Tony Hawk Foundation