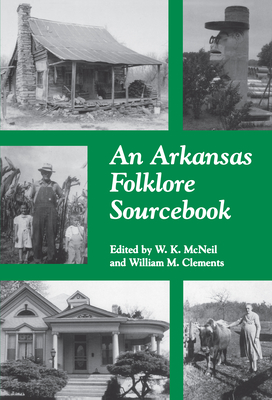 Arkansas’s rich folk tradition is shown by the variety of its manifestations: a 250-year-old ballad, an archaic method of hewing railroad crossties with a broadax, the use of poultices and toddies to treat the common cold, and swamps of evil repute are all parts of the tradition that constitutes Arkansas folklore. In fact, as the essays selected by W.K. McNeil and William M. Clements show, these few examples only begin to tell the story.

Starting with a working description of folklore as “cultural material that is traditional and unofficial” and characterized by a pattern of oral transmission, variation, formulaic structures, and usually uncertain origin, the authors survey in detail a wide array of folk objects, activities, beliefs, and customs. Among the rich offerings in this sourcebook are a discussion of the history of folklore research in Arkansas, an examination of some of the traditional songs and music still being preformed, a thoughtful exploration of the serious side of “tall tales” and “windies,” an investigation of folk architecture in Arkansas and what it reveals about our cultural origins, a study of many traditional foods and there preparation methods, an analysis of superstitions and beliefs, and a description of festivals and celebrations that are observed to this day.

Complemented by biographies of reference works and audio and video recordings of the state’s folk materials, An Arkansas Folklore Sourcebook is the first complete guide to the study of one state’s “unofficial culture.”

W.K. McNeil was the author or editor of several books on history and folklore, including The Life and Adventures of an Arkansaw Doctor. He held the post of folklorist at the Ozark Folk Center in Mountain View, Arkansas, for many years.

William M. Clements is the author or editor of several publications on folklore and popular culture, including The Greenwood Encyclopedia of World Folklore and Folklife. He is a retired professor of English and folklore at Arkansas State University.

“An Arkansas Folklore Sourcebook is an invaluable reference to a special corner of living American tradition, a model of scholarship, and a joy to read.”
—Simon J. Bronner, author of Consuming Visions