Death by Fire and Ice: The Steamboat Lexington Calamity (Hardcover) 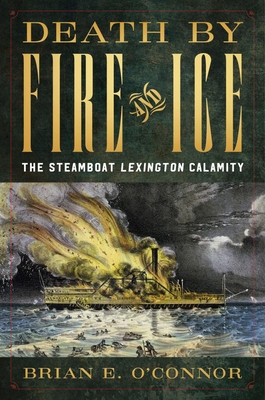 Death by Fire and Ice: The Steamboat Lexington Calamity (Hardcover)


Not On Our Shelves—Ships in 1-5 Days
Death by Fire and Ice tells the little-known story of the sinking of the steamboat Lexington on Long Island Sound in January 1840. Built in 1835 by Cornelius Vanderbilt, the Lexington left Manhattan bound for Stonington, Connecticut, at four o'clock in the afternoon on a bitterly cold day carrying an estimated one hundred forty-seven passengers and crew and a cargo of, among other things, baled cotton. After making her way up an ice-encrusted East River and into Long Island Sound, she caught fire off Eaton's Neck on Long Island's north shore at approximately seven o'clock. The fire quickly ignited the cotton stowed on board. With the crew unable to extinguish the fire, the blaze burned through the ship's wheel and tiller ropes, rendering the ship unmanageable. Soon after, the engine died, and the blazing ship drifted aimlessly in the Sound away from shore with the prevailing wind and current. As the night wore on, the temperature plummeted, reaching nineteen degrees below zero. With no hope of rescue on the dark horizon, the forlorn passengers and crew faced a dreadful decision: remain on board and perish in the searing flames or jump overboard and succumb within minutes to the Sound's icy waters. By three o'clock in the morning the grisly ordeal was over for all but one passenger and three members of the crew--the only ones who survived. The tragedy remains the worst maritime disaster in the history of Long Island Sound. Within days, the New York City Coroner convened an inquest to determine the cause of the disaster. After two weeks of testimony, reported daily in the New York City press, the inquest jury concluded that the Lexington had been permitted to operate on the Sound "at the imminent risk of the lives and property" of its passengers, and that, had the crew acted appropriately, the fire could have been extinguished and a large portion, if not all, of the passengers saved. The public's reaction to the verdict was scathing: the press charged that the members of the board of directors of the Transportation Company, which had purchased the Lexington from Commodore Vanderbilt in 1839, were guilty of murder and should be indicted. Calls were immediately made for Congress to enact legislation to improve passenger safety on steamboats. This book explores the ongoing debate in Congress during the nineteenth century over its power to regulate steamboat safety; and it examines the balance Congress struck between the need to insulate the nation's shipping industry from ruinous liability for lost cargo, while at the same time greatly enhancing passenger safety on the nation's steamboats.
Brian E. O'Connor was born in Brooklyn, New York. He received a BA, magna cum laude, in government and politics from St. John's University and a JD from St. John's University School of Law, where he served as the publications editor of the Law Review. After beginning his legal career with a clerkship on the New York Court of Appeals, he became a partner in a prominent Wall Street law firm, where he specialized in complex commercial litigation for thirty-eight years before retiring as the firm's General Counsel in 2017. He lives on Eaton's Neck in Northport, New York, with his wife Helen and his two Portuguese water dogs, Maya and Nelson.