Districts That Succeed: Breaking the Correlation Between Race, Poverty, and Achievement (Paperback) 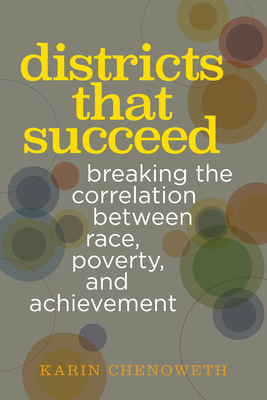 Districts That Succeed: Breaking the Correlation Between Race, Poverty, and Achievement (Paperback)


Not On Our Shelves—Ships in 1-5 Days
In Districts That Succeed, long-time education writer Karin Chenoweth turns her attention from effective schools to effective districts. Leveraging new, cutting-edge national research on district performance as well as in-depth reporting, Chenoweth profiles five districts that have successfully broken the correlation between race, poverty, and achievement. Focusing on high performing or rapidly improving districts that serve children of color and children from low-income backgrounds, the book explores the common elements that have led to the districts' successes, including leadership, processes, and systems. Districts That Succeed reveals that helping more students achieve is not a matter of adopting a program or practice. Rather, it requires developing a district-wide culture where all adults feel responsible for the academic well-being of students and adopt systems and processes that support that culture. Chenoweth explores how districts, from urban Chicago, Illinois to rural Seaford, Delaware, have organized themselves to look at data to guide improvement. Her research highlights the essential role of districts in closing achievement gaps and illustrates how successful outliers can serve as resources for other districts. With important lessons for district leaders and policy makers alike, Chenoweth offers the hard-won wisdom of educators who understand the power of schools to, as one superintendent says, "change the path of poverty.
Karin Chenoweth is the writer-in-residence at The Education Trust, a national education advocacy organization that works to improve the academic achievement of all children, particularly children of color and children who live in poverty. She is author of four books previously published by Harvard Education Press: Schools That Succeed: How Educators Marshal the Power of Systems for Improvement (2017); Getting It Done: Leading Success in Unexpected Schools, coauthored with Christina Theokas (2011); HOW It's Getting Done: Urgent Lessons from Unexpected Schools (2009); and It's Being Done: Academic Success in Unexpected Schools (2007). She is also the creator of the ExtraOrdinary Districts podcast and its pandemic spinoff, ExtraOrdinary Districts in Extraordinary Times. A longtime education writer, she wrote a weekly column on schools and education for the Washington Post for five years and for several years wrote regular posts for Huffington Post and the now-defunct Britannica Blog. She was senior writer and editor at Black Issues In Higher Education (now Diverse); reporter and editorial editor of the now-defunct Montgomery Journal; and a stringer with a byline for UPI reporting from Ankara, Turkey. Her work has appeared in Education Week, Kappan, and Educational Leadership. She graduated from Columbia University's School of Journalism in 1979.