Operation Pedro Pan and the Exodus of Cuba's Children (Paperback) 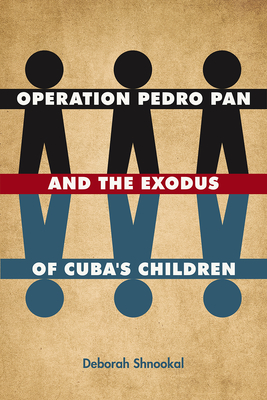 Operation Pedro Pan and the Exodus of Cuba's Children (Paperback)

This in-depth examination of one of the most controversial episodes in U.S.-Cuba relations sheds new light on the program that airlifted 14,000 unaccompanied children to the United States in the wake of the Cuban Revolution. Operation Pedro Pan is often remembered within the U.S. as an urgent "rescue" mission, but Deborah Shnookal points out that a multitude of complex factors drove the exodus, including Cold War propaganda and the Catholic Church's opposition to the island's new government.

Shnookal illustrates how and why Cold War scare tactics were so effective in setting the airlift in motion, focusing on their context: the rapid and profound social changes unleashed by the 1959 Revolution, including the mobilization of 100,000 Cuban teenagers in the 1961 national literacy campaign. Other reforms made by the revolutionary government affected women, education, religious schools, and relations within the family and between the races. Shnookal exposes how, in its effort to undermine support for the revolution, the U.S. government manipulated the aspirations and insecurities of more affluent Cubans. She traces the parallel stories of the young "Pedro Pans" separated from their families--in some cases indefinitely--in what is often regarded in Cuba as a mass "kidnapping" and the children who stayed and joined the literacy brigades. These divergent journeys reveal many underlying issues in the historically fraught relationship between the U.S. and Cuba and much about the profound social revolution that took place on the island after 1959.

Publication of the paperback edition made possible by a Sustaining the Humanities through the American Rescue Plan grant from the National Endowment for the Humanities.