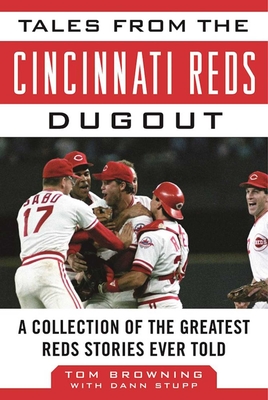 Browning tries to answer a variety of questions that fans have been asking for years: What was his reaction to the lifetime suspension of his manager and friend Pete Rose? How did a ragtag group of Cincinnati ballplayers topple the mighty Oakland A's in the 1990 Fall Classic? Was that really Tom on a Sheffield Avenue rooftop—in uniform—during a 1993 Reds-Cubs game at Wrigley Field? Browning also offers stories and anecdotes about some of the biggest names in Reds history, including:

He devotes an entire chapter to his perfect game, considered to be one of the greatest moments in club history. Tales from the Cincinnati Reds Dugout is a must-have for any Reds fan.
Tom Browning was the first rookie to earn twenty wins since Bob Grim in 1954. He retired in 1995. He lives in Edgewood, Kentucky.

Dann Stupp is editor-in-chief for MMAJunkie.com and a member of the Society for American Baseball Research. He lives in Cincinnati, Ohio.