Tales from the Miami Hurricanes Sideline: A Collection of the Greatest Hurricanes Stories Ever Told (Hardcover) 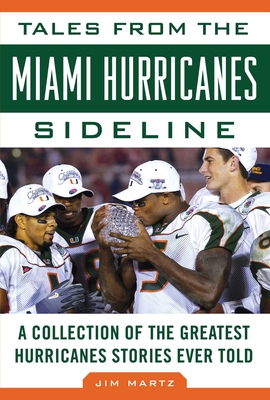 Tales from the Miami Hurricanes Sideline: A Collection of the Greatest Hurricanes Stories Ever Told (Hardcover)


Special Order—Subject to Availability
Here is the greatest collection of anecdotes and stories ever told about Canes football. In this updated edition, Jim Martz, who has covered the team for more than three decades, chronicles the ups, downs, and sideways of this spirited program that has produced five national championship teams under four different coaches since 1983.

University of Miami football is more than national championships, thirty-game winning streaks, and being a pipeline to the NFL. It’s the Gator Flop, defeating Tulane on a fifth down, and playing three games in eight days. It’s converting third and 44 against Notre Dame, Michael Irvin talking smack with Florida State’s Deion Sanders, and Vinny Testaverde being sacked by hamburgers. It’s the Jet Lag Kids playing seven road games in one season, including one in Tokyo, and it’s the Ibis mascot being arrested on the field in Tallahassee and being nicked by a bullet on Bourbon Street.

They have won under charismatic coaches and under low-key coaches. More than anything, they have won with colorful players. In an age of parity and just a few years removed from the program nearly being dropped, the Hurricanes have defied the odds and become a dynasty of modern college football.
Jim Martz has covered University of Miami football since 1973 and has been editor of CaneSport magazine since 1992. He has authored numerous works on college football and professional tennis. Martz was a sportswriter and editor for the Des Moines Register for three years before serving as a sportswriter, editor, and columnist for the Miami Herald from 1970 to 1991.