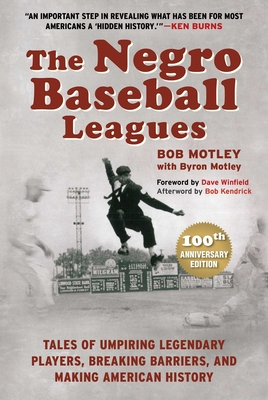 
Special Order—Subject to Availability
Celebrating the 100th Anniversary of the Negro Leagues with updates and additions throughout!

The Kansas City Monarchs, the Chicago American Giants, the St. Louis Stars, the Birmingham Black Barons, the Homestead Grays, and the Indianapolis Clowns; for over fifty years, they were the Yankees, Cardinals, and Red Sox of black baseball in America. And for over a decade beginning in the late 1940s, umpire Bob Motley called balls and strikes for many of their games, working alongside such legends as Satchel Paige, Hank Aaron, Ernie Banks, and Willie Mays.

Today, Motley is the only living arbiter from the Negro Leagues. His personal account of the Negro Leagues is a revealing, humorous, and unforgettable memoir celebrating a long-lost league and a remarkable group of baseball players. In this brand new 100-year anniversary edition of Ruling Over Monarchs, Giants, and Stars, Motley and his son Byron share the characters, adventures, and challenges faced by these amazing men as they enthusiastically embraced America’s pastime and made it their own. Filled with stories of talented heroes, small miracles, and downright fun, this unique memoir is a must-read for any baseball fan.
Bob Motley was the last surviving umpire from the Negro Baseball Leagues. It was while a combat Marine in World War II that Motley found his life’s passion, umpiring. In addition to his time in the Negro Leagues, he umpired in the Pacific Coast League and the College World Series, and also officiated semi-pro and college basketball and football games. A founding board member of the Negro Leagues Baseball Museum, the facility now boasts a life-size statue of Motley at home plate on its historic Field of Legends baseball diamond. Motley was also the recipient of the Congressional Gold Medal of Honor for his military service. He passed away in 2017 at the age of 94.

Byron Motley is a modern day Renaissance man. An accomplished singer, songwriter, filmmaker, lecturer, and photographer, he has performed on Broadway and alongside such luminaries as Barry Manilow, Celine Dion, John Legend and the Boston Pops Orchestra. Inspired by the stories he grew up hearing from his father, Bob Motley, their co-authorship on The Negro Baseball Leagues is the only father/son book collaboration focusing on Negro League history. Byron is also the author of the photo book Embracing Cuba, which visually chronicles the island nation of Cuba, which he considers his home away from home.  Currently producing a documentary about the Negro Leagues, he lives in Los Angeles.

Dave Winfield has been hailed as one of the greatest athletes ever to play professional sports. The 12-time All-Star is among the all-time leaders in hits, home runs, and RBIs in Major League Baseball history, inducted into the National Baseball Hall of Fame in 2001—his first year of eligibility. Currently a management consultant advisor to the executive director of the Major League Baseball Players Association, he has been a studio analyst for ESPN’s Baseball Tonight, as well as other roles in the game of baseball. Along with being a New York Times bestselling author, Winfield has been recognized for his numerous humanitarian projects, including the Winfield Foundation and TURN IT AROUND! He currently resides in Bel Air, California, with his wife Tonya, and is the father of three children, Arielle, David II, and Shanel.

Dionne Warwick is a six-time Grammy Award winning music legend, including the coveted Lifetime Achievement Award, which she received in 2019. Scintillating, soothing and sensual are just a few superlatives that best describe her familiar and celebrated voice. A cornerstone of American pop music and culture, Warwick’s career spans seven decades of hit-making music, and has established her as an international music icon. She lives in South Orange, NJ.

Bob Kendrick is the current president of the Negro Leagues Baseball Museum (NLBM), a position he’s held since 2011. Under his guidance, he has been responsible for the museum’s day-to-day operations and creation of several signature museum educational programs. Winning numerous awards for his work, Kendrick has become one of the leading authorities on the topic of Negro Leagues Baseball history and its connection to issues relating to sports, race, and diversity.