Toil and Trouble: A Women's History of the Occult (Hardcover) 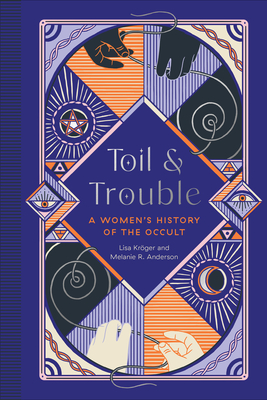 Toil and Trouble: A Women's History of the Occult (Hardcover)


On Our Shelves Now at:
​​A celebration of magical women and nonbinary people in American history, from Salem to WitchTok.

Meet the mystical women and nonbinary people from US history who found strength through the supernatural—and those who are still forging the way today. From the celebrity spirit mediums of the nineteenth century to contemporary activist witches hexing the patriarchy, these icons have long used magic and mysticism to seize the power they’re so often denied.

Organized around different approaches women in particular have taken to the occult over the decades—using the supernatural for political gain, seeking fame and fortune as spiritual practitioners, embracing their witchy identities, and more—this book shines a light on underappreciated magical pioneers, including:

✦ Dion Fortune, who tried to marshal a magical army against Adolf Hitler
✦ Bri Luna, the Hoodwitch, social media star and serious magical practitioner
✦ Joan Quigley, personal psychic to Nancy Reagan
✦ Marie Laveau, voodoo queen of New Orleans
✦ Elvira, queer goth sex symbol who defied the Satanic Panic
✦ And many more!
Lisa Kröger is the coauthor of the Bram Stoker and Locus Award winning Monster, She Wrote. She holds a PhD in English and her short fiction has appeared in Cemetery Dance magazine and Lost Highways: Dark Fictions from the Road (Crystal Lake Publishing, 2018). She cohosts the Know Fear podcast (knowfearcast.com).

Melanie R. Anderson is the coauthor of the Bram Stoker and Locus Award winning Monster, She Wrote. She is an assistant professor of English at Delta State University in Cleveland, Mississippi. Her book Spectrality in the Novels of Toni Morrison (Tennessee Press, 2013) was a winner of the 2014 South Central MLA Book Prize. She cohosts the Know Fear podcast (knowfearcast.com).
An October 2022 Book Club Pick for The Mary Sue

“A fascinating and at times infuriating look at the ways in which women have gained power through the occult, been persecuted by it, and forged relationships with one another through it.”—GeekMom

“Anyone who has dabbled in the craft by way of #witchtok will deepen their knowledge immensely by reading this book. And with a final chapter titled “100% That Witch,” you know you’re going to learn a lot and have some fun.”—BookPage

“A rich collection of short biographies of women and nonbinary people who were involved with an influence in the occult...I just kept wanting to know more.”—The Feminist Book Club

“Toil and Trouble is not only a thorough and efficient study of those who have come before, but a product of its time.”—Chapter 16