The General and the Genius (World War II Collection) (Paperback) 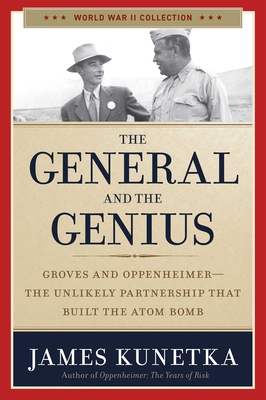 The General and the Genius (World War II Collection) (Paperback)


Not On Our Shelves—Ships in 1-5 Days
Two ambitious men. One historic mission.

With a blinding flash in the New Mexico desert in the summer of 1945, the world was changed forever. The bomb that ushered in the atomic age was the product of one of history’s most improbable but produc tive partnerships. The General and the Genius reveals how two extraordinary men pulled off the greatest scientific feat of the twentieth century.

Leslie Groves of the Army Corps of Engineers, the duty-driven son of a Presbyterian chaplain, was promoted to brigadier general in 1942 and made overlord of the Manhattan Project. His mission: to beat the Nazis to the atomic bomb.

Groves turned to the nation’s preeminent theoretical physicist, a man who was his opposite in nearly every respect—J. Robert Oppenheimer, the martini-quaffing son of wealthy Jewish immigrants, whose background was riddled with communist associations.

In their three-year collaboration, the iron-willed general and the visionary scientist led a brilliant team of physicists and engineers sequestered in a secret mountaintop lab. Overcoming immense scientific and technological challenges, they built the fearsome weapons that ended the war but introduced the human race to unimaginable new terrors.

While the greatest battles of history raged around the globe, the most momentous work of the Second World War proceeded silently in a setting of almost monastic seclusion. And at the heart of that story are two extraordinary men—the general and the genius.
James Kunetka grew up in Albuquerque, where many of the men whose story he tells here still lived. Later, as a consultant at Los Alamos with top-secret clearance, he evaluated classified documents in the archives for their historical value. A retired associate vice president of the University of Texas, Mr. Kunetka lives in Austin.