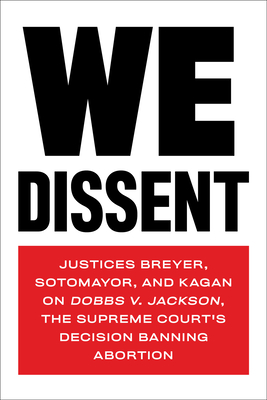 By Stephen Breyer, Elena Kagan, Sonia Sotomayor (From an idea by)


On Our Shelves Now at:
The full text of one of the most radical and controversial Supreme Court decisions in American history, highlighting the galvanizing dissent by Justices Breyer, Sotomayor, and Kagan ...

Dobbs v Jackson, the landmark decision to overthrow the rights first granted to women in the Roe v Wade decision fifty years ago, is the first U.S. Supreme Court decision in American history to actually take away from citizens a Constitutionally-protected right. As such it may be the most consequential Court ruling ever.

Compounding matters, the decision opened the door to the overthrow of still further rights — such as same-sex marriage, for example, or equal rights for trans people.

Nowhere is the danger of this decision made more clear than in the sobering yet electrifying dissent filed by Justices Breyer, Sotomayor, and Kagan. That dissent is highlighted in this edition, which includes the entire decision, to let readers decide for themselves, but forefronts the stirring and eloquently reasoned dissent.

That eloquence will surely inspire, inform, and fuel the increasingly impassioned debate during the tumultuous campaign season of the upcoming mid-term elections — and beyond.
Supreme Court Justice Stephen G. Breyer served on the US Supreme Court from 1994 through June 20, 2022.

Supreme Court Justice Elena Kagan has served on the US Supreme Court since 2010.
"This publication’s chief assets are its portability and, for readers who disagree with the majority as fervently as the dissenting justices do, the bolstering reassurance that at least someone understands the bedrock need for bodily autonomy as a prerequisite of liberty before they tackle the majority opinion, penned by Samuel Alito." -- Kirkus Reviews