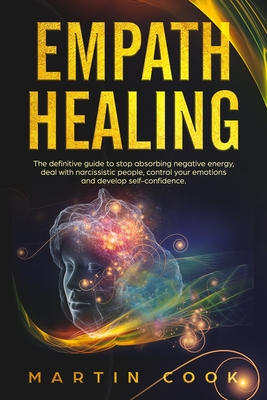 
Not On Our Shelves—Ships in 1-5 Days
(This book cannot be returned.)
Are you the kind of highly sensitive person who feels agonized in someone's grief or trauma, crouching down to bestow love for the roadside puppy, or live through the pain or loss in a fictional TV show?

Then you are definitely an empath.

Empathy is a term used to describe an intrinsic trait to recognize and share the emotions of someone else. Empathy is an evolutionary trait bearing a link with some other primates like dogs and rats. Rudimentary empathy starts developing in infants at the age of 2 with having an emotional response corresponding to that of another person.
An empath is a person with the innate ability to absorb emotions or sentiments of others.
Empaths find it difficult to be in a relationship as can't fully experience emotional freedom with someone else as the traditional paradigm is never defined. They need their personal space to avoid feeling subdued or getting engulfed. Empaths are very sensitive, sometimes they do seek validation from friends and close ones and end up being stabbed with humiliation, so they disguise themselves with indifference and independence.
Empaths build a wall around themselves mostly finding it difficult to dissolve socially and find solace and joy spending time alone on their own. Another scientific reason is its increased dopamine sensitivity.
Narcissism is the pursuit of gratification from egotistic admiration of one's idolized self-image and attributes. The best ways to deal with a narcissist is to identify them first, their limitations, and then avoid their mind games, determine if an intervention works, and deal with compassion always.
An empath should learn to heal self first before healing others and stop being an emotional sponge. An empath should cut connections from all negative thought forms and be in the presence of like-minded, uplifting, positive people. Also, learn to meditate and control your mind and body. Another suggestive method is a sea salt bath and use of protective stones.
At this point in your life, if you feel that you are an empath and that you need to relieve yourself off from the mental constraints, you will have to read this book

This book is the definitive guide to stop absorbing negative energy, deal with narcissistic people, control your emotions and develop self-confidence.

You will also learn the following: Would you like to know more?
Buy this book, immediately to be the proud confident empath emotionally unharmed by society.

Scroll up to the top and select the buy now button