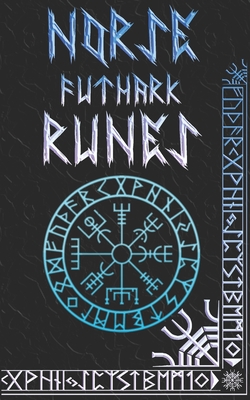 
Not On Our Shelves—Ships in 1-5 Days
(This book cannot be returned.)
Norse Runic Magic, The Meaning of the Futhark Runes, Divination and Rune Casting Brittany Nightshade, the author of the popular "Book of Shadows" spellbook series, has released this Runic Handbook for those who would like a compact resource detailing the Elder Futhark Runes and their meanings. This simple beginners handbook is a great reference guide for anyone wanting to familiarize themselves with the meaning behind the Futhark Runes for purposes of Divination, Rune Magick, etching, or if you just want to learn more about these ancient Norse symbols.

The runes are the written letters that were used by the Norse and other Germanic peoples before the adoption of the Latin alphabet in the later Middle Ages. Unlike the Latin alphabet, which is an essentially utilitarian script, the runes are pictographs of some of the most powerful forces in the cosmos. In fact, the word "rune" and its cognates across past and present Germanic languages mean both "letter" and "secret/mystery." The letters called "runes" allow one to access, interact with, and influence the world-shaping forces they symbolize. Thus, when Odin sought the runes, he wasn't merely attempting to acquire a set of arbitrary representations of human vocal sounds. Rather, he was uncovering an extraordinarily potent system of magic. The Runic Handbook covers all 24 Futhark Runes and has a section on common Nordic symbols and their meanings including the Vegvisir, Mjolnir, Yggdrasil, The Valknut, The Helm of Awe, and The Triple Horn of Odin. Includes chapter on Divination and Rune casting. In the back of the book are large images of each Rune and Symbol with a blank backside for each image so you can write your own notes or even create your own Rune Magick Rituals.