Truth Above All: The Japuji of Guru Nanak (Paperback) 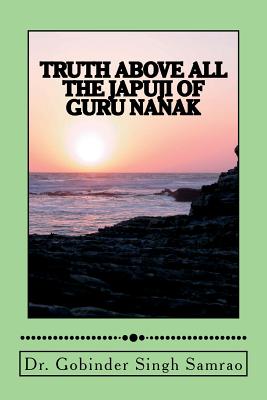 Truth Above All: The Japuji of Guru Nanak (Paperback)


Not On Our Shelves—Ships in 1-5 Days
(This book cannot be returned.)
Truth above All: the Japuji of Guru Nanak is an objective and rational interpretation of the Japuji the opening verse of the Adi Granth, the Sikh scripture. Penned by Nanak, the first Guru of the Sikhs, it occupies a pivotal position in Sikh Philosophy. The coded language and compact style of this verse make it easy to recite but difficult to understand. Though most Sikhs chant it daily in the morning, few of them claim to know its authentic meaning. The void between chanting and understanding has led to a mushroom growth of interpretations of the text.All these interpretations, however, portray it as a manual of worship while on closure look it displays the characteristics of a manual of science. Scripted by Guru Nanak in the medieval times when all science was in infancy, it may truly be called the first ever manifesto of science. However, because it appeared before the intellectual environment was ripe for its right evaluation it was listed as a religious text and began to be used as such.The work in hand does not share the assumptions and beliefs expressed in this type of interpretations. Brushing aside their subjective bias and methodological flaws, it makes an objective approach to narrow down on the original message of the Master contained in this unique composition. Confining strictly to the domain of objectivity, it applies the proven techniques of scientific method for decoding and interpreting this poetic text. It makes a realistic attempt to trace the possible correlations between the wisdom contained in this classic and the vision of the modern science. It is neither an opinion nor a religious discourse but a positive endeavor to read the mind of Guru Nanak through his own creation.
The author Dr. Gobinder Singh Samrao (b.1942) was born at Jogipur in Patiala district of Punjab in India. He has a double Masters', an M. Phil. and a Ph.D. degree from leading Universities in India. He also studied at San Jose State University San Jose (California) and is a many-time merit holder in his academic career. Dr. Samrao taught History and Political Science in various post graduate institutions in Punjab. He was an Associate Professor of Political Science at Punjabi University Patiala. He is a conscientious social scientist and his intimate areas of interest are history, politics, religion, science, medicine and literature. He is an avid reader and a versatile writer. His publications are Religion and Politics in the Punjab (1986), Truth above All: The Japuji of Guru Nanak (2013), So Dukh Kaisa Pavai (2016) (Punjabi) and Japuji da Rabb: Moolmantrik Drishtikon (2018) also in Punjabi. He writes with conviction and his works are known for scientific perspective and objectivity. Dr. Samrao has a passionate interest in Homeopathy. He practices this art in Central Valley in California.