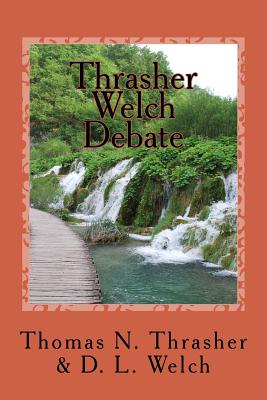 
Not On Our Shelves—Ships in 1-5 Days
(This book cannot be returned.)
Baptism has been a subject of discussion among professing Christians since the first century. Differences in belief and practice now exist concerning its element, action, candidate, purpose, and administrator. Some also teach that the Scriptures specify certain words to be spoken by the administrator at the time of water baptism. All of these ideas are worthy of study and discussion so that we may come to a knowledge of the truth revealed by God. This volume contains the debate between Mr. D. L. Welch (of the United Pentecostal Church) and Mr. Thomas N. Thrasher (of the church of Christ) on "the baptismal formula" issue. These men served as moderators during the Falls-Tubbs debate held in Jasper, Alabama in February, 1972. They agreed to discuss this question through an exchange of written articles. Upon completion, the debate was published in book form by the Gospel Defender Publishing Company in 1973.
Thomas N. Thrasher has participated in more than 100 formal debates in 14 states. Fifteen of them have been published in book form. This discussion with Mr. Welch was one of his first efforts, when he was 24 years old. He lives in Decatur, Alabama with his wife of 47 years. In addition to preaching the gospel for more than 52 years, he has been employed as a mathematics teacher, school administrator, or college professor for 46 years. D. L. Welch was for many years recognized as the leading debater on behalf of the "Oneness Pentecostal" people. A longtime resident of Pensacola, Florida, he participated in more than 200 formal debates during his lifetime. The Falls-Welch Debate, the Thrasher-Welch Debate and the Religious Debate on Pentecostal Doctrine (Moore-Welch Debate) were published in book form. Among the many, well-known debaters whom he met in public discussions were J. D. Tant, W. Curtis Porter, Guy N. Woods, Gus Nichols, W. L. Totty, Charles Holt, and Carrol Sutton.