Till Death Do Us Part (British Library Crime Classics) (Paperback) 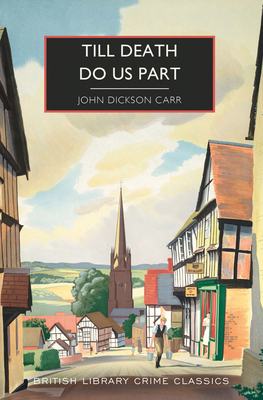 Till Death Do Us Part (British Library Crime Classics) (Paperback)

"Who can I trust?" Love-sick Dick Markham is reeling. He's set to marry Lesley Grant—a woman whom he learns is not who she appears to be. She seems to have been associated with three poisonings, all of which were in locked rooms. Another crime has been committed and we will watch the great Dr. Fell investigate through Markham's watchful eyes.

That night the enigmatic fortune teller—and chief accuser—is found dead in an impossible locked-room setup, casting suspicion onto Grant and striking doubt into the heart of her lover. Lured by the scent of the impossible case, Dr. Gideon Fell arrives from London to examine the perplexing evidence and match wits with a meticulous killer at large.

First published in 1944, Till Death Do Us Part remains a pacey and deeply satisfying impossible crime story, championed by Carr connoisseurs as one of the very best examples of his mystery writing talents. This edition includes an introduction by CWA Diamond Dagger Award-winning author Martin Edwards.

John Dickson Carr (November 30, 1906 - February 27, 1977) was a hugely popular and prolific author of crime fiction, regarded as one of the finest writers of ‘Golden Age’ mysteries. He was one of only two Americans ever admitted to the Detection Club, a prestigious honor amongst writers.

"Dark rumors lay the groundwork for another vintage locked-room puzzle from the acknowledged master of the form. Even seasoned fans who spot the killer will be hard-pressed to explain exactly how this impossible crime was committed." — Kirkus Reviews

"[Till Death Do Us Part] epitomizes the goal of the British Library Crime Classics—to reissue outstanding mysteries for a new audience. " — Publishers Weekly, Starred Review

"Everything fans of locked-room crime novels love can be found here, in this reissued 1944 stumper by John Dickson Carr, the master of locked-room and “impossible crime” mysteries that are, at once, whodunnits and howdunnits." — Booklist