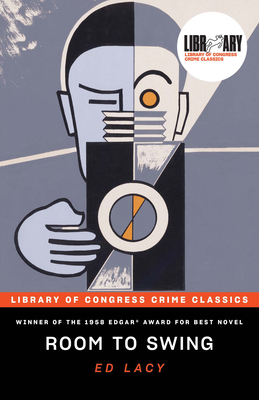 "This 1958 Edgar Award winner for best novel from Lacy (1911–1968) masterfully combines a classic genre trope with a powerful depiction of the impact of racism in 1950s America."— Publishers Weekly, Starred Review

"Though private investigators were the most popular figures in crime writing, especially in the work of Dashiell Hammett, Raymond Chandler, Ellery Queen, and Rex Stout, no one had created a Black hard-boiled private eye in a noir setting until Ed Lacy's Room to Swing."—Leslie Klinger, from Introduction

College-educated and decorated war-veteran Toussaint Moore, finds that his employment options are limited as a Black man in 1950s America. With little choice, he seeks out a living as a private eye, serving Black clients in his hometown of Harlem. When hired by the television producers of a reality show called "You—Detective!" Touie must keep tabs on the whereabouts of an accused child molester.

While waiting for the episode to air, Touie finds the man murdered and becomes the prime suspect in the investigation. Forced to flee, he goes to a small Ohio town where the deceased was wanted for his crime.

"Lacy asks whether a Black man (in the late fifties) can go everywhere he needs to, with the freedom his job requires, in order to conduct the investigation necessary to crack a case."—Criminal Element

LESLIE S. KLINGER is the two-time Edgar® winning editor of New Annotated Sherlock Holmes and Classic American Crime Fiction of the 1920s. He has also edited two anthologies of classic mysteries and, with Laurie R. King, five anthologies of stories inspired by the Sherlock Holmes Canon. Klinger is the series editor of Library of Congress Crime Classics, a partnership of the Library of Congress and Poisoned Pen Press/Sourcebooks. He is a former Chapter President of the SoCal Chapter of the Mystery Writers of America and lives in Malibu, California.

"This 1958 Edgar Award winner for best novel from Lacy (1911–1968) masterfully combines a classic genre trope with a powerful depiction of the impact of racism in 1950s America. The pacing, sharp-edged prose, and characterizations are all top-notch. With any luck, this assured and memorable crime novel will lead to further reissues of Lacy’s work." — Publishers Weekly, Starred Review