Christianity and the Craft: Essays, Interviews, and Testimonies on Freemasonry (Paperback) 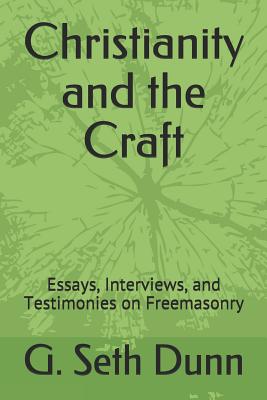 Christianity and the Craft: Essays, Interviews, and Testimonies on Freemasonry (Paperback)


Not On Our Shelves—Ships in 1-5 Days
(This book cannot be returned.)
There are no Mormons, Jehovah's Witnesses, Scientologists, or Muslims on the membership rolls of your local church. Adherents to each of these cults gather together with members of their own faiths to worship their false gods. They exert no internal influence on your local body of believers. The members of your church see them clearly for what they are - lost people in need of a gospel witness. They are, at worst, external threats. Yet there is in the midst of Christian churches (especially Southern Baptist ones) what author Jack Harris has labeled an "invisible cult". The name of this cult is "Freemasonry". Harris was able to identify this invisible cult because he was himself a former "Worshipful Master" in the Masonic Lodge. Like many other Masons who have come to faith in Jesus Christ, Harris left the Masonic Lodge and sought to warn others about the evil within it. Many Christians are under the unfortunate misimpression that the Masonic Lodge is a harmless, charitable fraternal organization. However, nothing could be further from the truth. Freemasonry is not just a fraternal body but a false religion that bestrides geography and spans history. Self-professed Christians who take part in the Masonic religion engage in the sin of syncretism. This is a serious matter. God not only holds such "Christian" men responsible for their personal sin, He holds their churches responsible as well. The concept of personal and corporate accountability for sin can be found in the 7th Chapter of Joshua. As they started their campaign to conquer the Promised Land, God ordered the Israelites to destroy the city of Jericho. By God's order, no spoils of war were to be kept from the city. One disobedient Israelite, Achan, secretly retained fine clothing, gold, and silver. Because of Achan's actions, Israel was defeated, by an inferior force, in its next battle. The whole congregation suffered because of the sin of one. God's people are tied together in covenant relationship with God and each other. Fellow church members are morally and biblically obligated to hold one another accountable for sin, restoring the repentant and spurning rebellious. Like adultery, swindling, and drunkenness, participation in Freemasonry is a separating sin. Church members are biblically obligated to purge the wickedness of Freemasonry from their church bodies.Unfortunately, the secretive nature of Freemasonry prevents many church members from seeing the vile sin in their midst. Like Achan's treasure, the perverse details of the Masonic religion are hidden in darkness. Nevertheless, the secret sin of Masonry can hinder revival in the local church today just as Achan's secret sins stole victory from God's people in the past. I write this book in the hope of shedding biblical light on the cult of Freemasonry and encouraging Christians to act in accordance with the Biblical mandate to be a holy people by calling "Christian" Masons to repentance. Included herein are various essays addressing the basic incompatibilities of Freemasonry with Christianity. Also included are number of testimonies I collected from pastors and former Freemasons who have repented in their involvement with the Craft. As you read the contents of this book, please consider what you've learned and your moral responsibilities in light of James 4:17.