Hospital Trains and Vessels during the Civil War: The Evolution in the Handling and Transportation of the Wounded (Paperback) 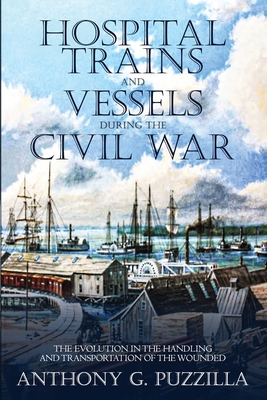 Hospital Trains and Vessels during the Civil War: The Evolution in the Handling and Transportation of the Wounded (Paperback)

The removal of the wounded from Civil War battlefields presented a major logistical problem, mainly because both sides were unprepared for the scope of the battles and the high number of wounded soldiers that needed assistance. Both the North and the South believed the war would be short--and they would be victorious. Dealing with the realities of war came as something of a surprise.

Public outcry after the early medical disasters led to the development of effective systems of evacuation, and helped lead to the creation of humanitarian agencies to assist with the sick and wounded. Improvements included an organized Ambulance Corps and an elaborate system of roads, rails, and waterways to speed the wounded soldiers to established hospitals.

Using railroads for transporting the wounded from the battlefields evolved from the early days of the war, where they were using improvised flat cars and box cars, to the development of rail cars specifically designed to carry patients in comfort. These special cars also allowed for caring for the men in transit.

In areas where the use of railroads was difficult, the North moved wounded soldiers by water. Again, they first used boats converted to the purpose, but later designed steamers specifically as floating hospitals. These steamers were used on the larger rivers and also along the Eastern seaboard, both moving the wounded to permanent hospitals and treating them along the way.

This book details the development and use of railroads and steamers for medical evacuation during the war. It also discusses the nurses, surgeons, and volunteers who made these life-saving advances possible. The newly-designed rail cars and steamers revolutionized military medicine and paved the way for our modern systems of transporting the wounded.