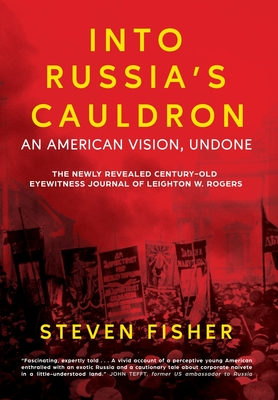 "Late in the night, the new Russia made itself known."

Into Russia's Cauldron takes you on the dramatic journey of an individual and an institution fighting the inevitable in revolutionary Russia, a story grippingly brought to life in the century-old journal of Leighton Rogers. In 1916, the National City Bank of New York, the precursor of today's Citibank, sent Rogers to Petrograd, the capital of the Russian Empire, to join a mission hell-bent on achieving American commercial preeminence in Russia--a vision set forth by the bank's president, Frank Vanderlip, who enthusiastically declared "Russia's need for capital is like Sahara's thirst for water."

Now published, Leighton Rogers' journal provides a fresh, riveting eyewitness account of that tumultuous time, his personal transformation under fire, the failure of America's then largest financial institution to timely perceive and mitigate risk, and enduring insights and foreboding about today's Russia. Into Russia's Cauldron is a compelling story of insight, conviction and hubris which will appeal to Russian history students, business and finance professionals, and readers looking for stand out real life drama.