The Skies Above: A Guide to UFO Sightings in the UK (Paperback) 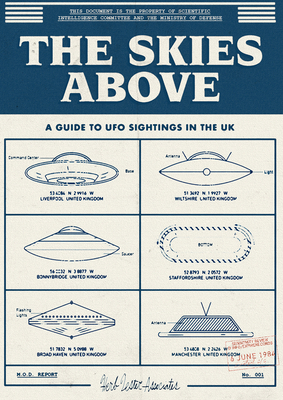 The Skies Above: A Guide to UFO Sightings in the UK (Paperback)


Not On Our Shelves—Ships in 1-5 Days
Using official reports and eyewitness accounts, this new illustrated map and guide documents credible unexplained sightings in The Skies Above the United Kingdom.

In recent years, naval, military and scientific sources have begun to acknowledge the existence of Unidentified Aerial Phenomena - UAP. Explanations run from the commonplace, such as balloons or birds, to the more thrilling notion of extra-terrestrial visitors. In this illustrated map and guide we stick to known facts - the what, where and who. Entries include the 1980 sightings in Rendlesham Forest by military personnel and reports of UFOs spotted opposite the Houses of Parliament in 2008.

Written and researched by the hosts of That UFO Podcast, The Skies Above is a fact-based but lively exploration of
one of the planet's last great mysteries.