Smuggled: An Illegal History of Journeys to Australia (Paperback) 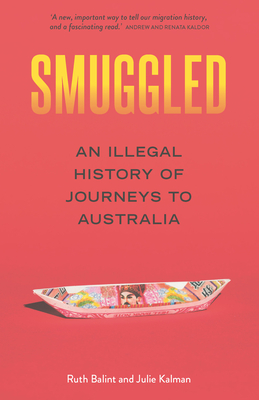 Smuggled: An Illegal History of Journeys to Australia (Paperback)


Special Order—Subject to Availability
(This book cannot be returned.)
"Louis was an agent of conspiracy, a 'people trafficker,' helping the captive and the helpless negotiate a precarious avenue to freedom. He was, I believe, genuinely on our side and, to this day, remains a hero for me." —Les Murray, sports commentator and ‘Soccer King’

People smugglers are the pariahs of the modern world. There is no other trade so demonised and, yet at the same time, so useful to contemporary Australian politics. But beyond the rhetoric lies a rich history that reaches beyond the maritime borders of our island continent and has a longer lineage than the recent refugee movements of the twenty-first century. Smuggled recounts the journeys to Australia of refugees and their smugglers since the Second World War—from Jews escaping the Holocaust, Eastern Europeans slipping through the Iron Curtain, ‘boat people’ fleeing the Vietnam War to refugees escaping unthinkable violence in the Middle East and Africa. Based on original research and revealing personal interviews, Smuggled marks the first attempt to detach the term ‘people smuggler’ from its pejorative connotations, and provides a compelling insight into a defining yet unexplored part of Australia’s history.
Julie Kalman is associate professor of history at Monash University. She writes about the history of French Jews, after the French Revolution and also following the Second World War. She is the child of migrants from Europe, and she has researched and published on topics related to her own history, including the history of migration to Australia and the Eurovision Song Contest. Ruth Balint is associate professor of history at the University of New South Wales. She teaches and writes about forced migration and refugees in the twentieth century. Her family were refugees from Europe after the Second World War. Her latest book, The Last Million: Displaced Persons and the Quest to Leave Europe, is published by Cornell University Press, due out in 2021. She and Julie are old friends and are often mistaken for sisters.
‘a timely corrective to the simplistic portrayal of people smugglers as evil scum.’ —Peter Mares, The Cranlana Centre for Ethical Leadership