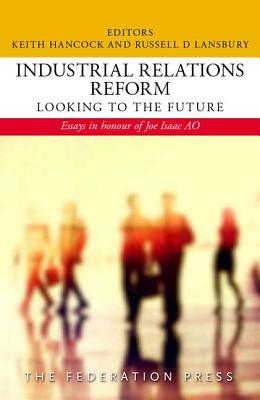 
Special Order—Subject to Availability
(This book cannot be returned.)
Keith Hancock AO is Emeritus Professor of Economics at Flinders University of South Australia, where he served as Vice-Chancellor between 1980 and 1987. He was Senior Deputy President of the Australian Industrial Relations Commission from 1987 to 1997. He headed two major Commonwealth government reviews: on National Superannuation (1974-77) and Australian Industrial Relations Law and Systems (1983-85). He has undertaken pioneering work on Australian labour markets and his definitive Australian Wage Policy: Infancy and Adolescence, was published by the University of Adelaide in 2013. He continues his work on the history of wage setting in Australia. He holds a BA from Melbourne University and a PhD from the London School of Economics. Russell Lansbury is Emeritus Professor and former Associate Dean (Research) in the Discipline of Work and Organisational Studies, in the University of Sydney Business School. He is former editor of the Journal of Industrial Relations and undertakes research on international and comparative employment relations. In his retirement as Emeritus Professor at the University of Sydney and Adjunct Professor at the Royal Melbourne Institute of Technology, Russell continues his work and travels. Work and Employment Relations - An Era of Change, written as a Tribute to Russell, covers topics relating to his wide research interests and contains the proceedings of a workshop sponsored in his honour by the Academy of the Social Sciences in Australia.