The Ocean's Whistleblower: The Remarkable Life and Work of Daniel Pauly (Hardcover) 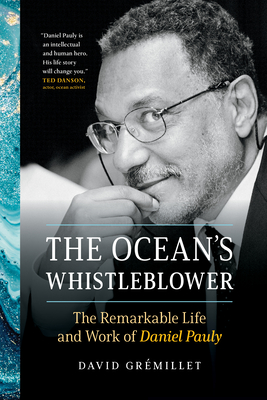 The Ocean's Whistleblower: The Remarkable Life and Work of Daniel Pauly (Hardcover)

" Daniel Pauly] is an iconoclastic fisheries scientist ... who is so decidedly global in his life and outlook that he is nearly a man without a country."--NEW YORK TIMES

"Daniel Pauly is a friend whose work has inspired me for years."--TED DANSON

Daniel Pauly is a living legend in the world of marine biology. He is also a man whose life has been shaped by struggle. In this first authorized biography, writer David Gr millet recounts the scientist's extraordinary life, including his heartbreaking childhood, his escape to Germany, his political and racial reawakening in 1960s America, and his one-of-a-kind career as a brave scientist who blew the whistle on overfishing.

Daniel Pauly was born in Paris after the Second World War to a white French mother and a Black American GI father. When his father left for America, Pauly's mother fell prey to a manipulative white family who adopted Pauly under murky circumstances. Pauly was taken to Switzerland, where he was treated cruelly as the family's live-in servant. Contact with his mother was prohibited. Against all odds, Pauly finished high school and fled to Germany, where he enrolled in university.

In Germany, Pauly blossomed. He pursued a career in oceanography, eventually travelling the world to conduct his groundbreaking, data-driven scientific research method. Pauly famously coined the influential term "shifting baselines," in which knowledge of environmental degradation is lost over time, leading to a misguided understanding of what we have helped destroy. He also blew the whistle on the powerful global fishing industry, alerting the public to the impacts of overfishing on our planet.

Told through interviews with Pauly himself, family, teachers, colleagues, and friends, Grémillet recounts Pauly's life with remarkable pace and precision. Epic, captivating, and inspiring, The Ocean's Whistleblower introduces one of the most important scientists of our time.