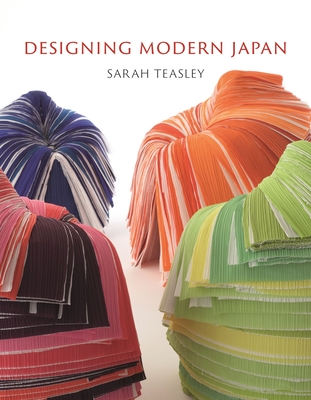 
Not On Our Shelves—Ships in 1-5 Days
A revealing look at Japanese design weaving together the stories of people who shaped Japan’s design industries with social history, economic conditions, and geopolitics.

From cars to cameras, design from Japan is ubiquitous. So are perceptions of Japanese design, from calming, carefully crafted minimalism to avant-garde catwalk fashion, or the cute, Kawaii aesthetic populating Tokyo streets. But these portrayals overlook the creativity, generosity, and sheer hard work that has gone into creating and maintaining design industries in Japan.

In Designing Modern Japan, Sarah Teasley deftly weaves together the personal stories of people who shaped and shape Japan’s design industries with social history, economic conditions, and geopolitics.. Key to her account is how design has been a strategy to help communities thrive during turbulent times, and for making life better along the way. Deeply researched and superbly illustrated, Designing Modern Japan appeals to a wide audience for Japanese design, history, and culture.
Sarah Teasley is professor of design at RMIT University, Melbourne. She is coeditor of Global Design History.
“Teasley draws on a rich and varied collection of sources to weave history, sociology, design commentary, and fascinating anecdotes into her account of the evolution of Japanese design following the country's Meiji Restoration of 1868. . . . Designing Modern Japan has much to offer readers who are interested in the cultural and social history of modern Japan as well as the many transformations of design in Japan as it emerged from a feudal society into a global economy. The photographs and illustrations, accompanied by Teasley's informed commentary, provide a fascinating glimpse into the lives of Japanese people and their aspirations at a time of tumultuous change from the late nineteenth century onward. . . . Peppered with fascinating historical data. . . . The meticulous research could make this book read almost like an academic study, but Teasley's accessible style and expert commentary make it equally rewarding for the general reader.”
— NIKKEI Asia

“Teasley’s meticulously detailed account of Japanese design history gives a satisfyingly complete picture of design as a practice that people have—and continue—to use for their own end.”
— Elizabeth Guffey, professor of art and design history, theory, criticism at SUNY Purchase, founding editor of "Design and Culture"

“A vibrant and powerful decoding of the modern history of Japan through design. A new and incomparable classic.”
— Kashiwagi Hiroshi, professor emeritus, Musashino Art University, Japan, design historian and critic

"This shrewd and elegantly illustrated book shows how Japanese designers and manufacturers have used design 'to weather change and sometimes as a lever to accelerate change.' Focusing on their institution-building and meaning-making activities, Teasley traces how a variety of carefully-designed objects and images circulated around Japan, through the empire, and across the globe. The result, like the objects under study, is the narrative they created of Japan itself as transnational, modernist, and enduring."
— Laura Hein, Harold H. and Virginia Anderson Professor of History, Northwestern University, author of "Post-Fascist Japan: Political Culture in Kamakura after the Second World War"