Are You Smarter Than a Chimpanzee?: Test Yourself Against the Amazing Minds of Animals (Paperback) 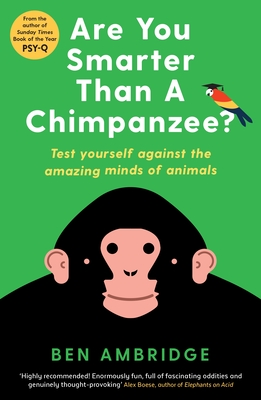 Are You Smarter Than a Chimpanzee?: Test Yourself Against the Amazing Minds of Animals (Paperback)


Not On Our Shelves—Ships in 1-5 Days
Animal science is bizarre and wonderful. At the extreme end of zoology, psychologists are designing personality tests for dogs and logic problems for pigeons. They're giving fish spatial reasoning problems and asking cockatoos to keep a beat. Now, through dozens of interactive puzzles, IQ tests and quizzes, Are You Smarter Than a Chimpanzee? lets you test yourself against the best nature has to offer. So: are you more than a match for a marmoset? Or a bit of a birdbrain? Based on real, cutting-edge science and debunking common myths about animals, Are You Smarter Than a Chimpanzee? will make you question your assumptions about our place in the animal kingdom - and, finally, explain the real difference between dog-people and cat-people.
Ben Ambridge is Reader in Psychology at the University of Liverpool and the ESRC International Centre for Language and Communicative Development (LuCiD). He is a recipient of the Guardian-Wellcome Science Writing Prize and his first book Psy-Q: A Mind-Bending Miscellany of Everyday Psychology was a Sunday Times Book of the Year and has been translated into a dozen languages. Ben writes on psychology for the Guardian and the Big Issue, and his TEDtalk on The Top 10 Myths of Psychology has been viewed over 2 million times. He lives in Sale, Greater Manchester.