The WikiLeaks Files: The World According to US Empire (Hardcover) 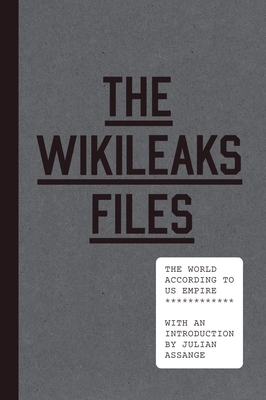 The WikiLeaks Files: The World According to US Empire (Hardcover)

By WikiLeaks, Julian Assange (Introduction by)


Backordered
Published in collaboration with WikiLeaks: What Cablegate tells us about US foreign policy

When WikiLeaks first came to prominence in 2010 by releasing 2,325,961 top-secret State Department cables, the world saw for the first time what the US really thought about national leaders, friendly dictators and supposed allies. It also discovered the dark truths of national policies, human rights violations, covert operations and cover-ups.

The WikiLeaks Files is the first volume that uses experts to collate the most important cables and shows their historic importance. The book explores in a series of chapters covering the major regions of the world how the US Empire has imposed its will. It reveals how the US imposes its agenda on the world: a new form of imperialism that uses a variety of tactics from torture and military action, to trade deals and “soft power,” in order to expand its influence. It shows the details of the close relationship between government and big business in promoting US goods around the world.

The WikiLeaks Files is the most comprehensive analysis of US State department cables to date. The introduction by Julian Assange—for the first time—exposes the on-going debates on freedom of information, international surveillance and justice.

Regional expert contributors include Dan Beeton, Phyllis Bennis, Michael Busch, Peter Certo, Conn Hallinan, Sarah Harrison, Richard Heydarian, Dahr Jamail, Jake Johnston, Alexander Main, Robert Naiman, Francis Njubi Nesbitt, Linda Pearson, Gareth Porter, Tim Shorrock, Russ Wellen, and Stephen Zunes.
Julian Assange has been the Editor-in-Chief of WikiLeaks since 2006. Since 2010 when the website published thousands of US military and diplomatic documents, he has been under investigation by the United States. That year he was called a “criminal” and a “terrorist” by some politicans, but also won the Sam Adams Award, was named Person of the Year by Le Monde’s readers’ and received the Time Readers’ Award. In 2011 he accepted the Sydney Peace Foundation Gold Medal for Peace, the Martha Gelhorn Prize for Journalism, the Walkley Award for most outstanding contribution to journalism, and the Amnesty International UK Media Award. Since June 2012 he has been seeking political asylum at the Ecuadorian Embassy, London.
“Long after the debate over the publication of these cables has been forgotten, the documents themselves will remain a valuable archive for scholars and students of US foreign policy. The essays that make up The WikiLeaks Files shed critical light on a once secret history. ”
—Edward J. Snowden, July 2015

“A deep dive into what the cables reveal about America’s dealings with a variety of states. It will be left to other books to argue whether WikiLeaks is right or wrong in their mission and approach. This one gives solid context to the cables themselves, explaining what they mean to the wider world.”
—Kirkus Reviews

“Takes on a huge amount of data and delivers a thorough introduction to the narratives of US policy that the cables reveal [and] … makes the information in the cables accessible to a wide audience of readers who may not otherwise have the time or background knowledge to search through the data themselves.”
—Publishers Weekly

“From government to big business, if you have a dirty secret, WikiLeaks is your nightmare.”
—Guardian

“I’ve heard the impact of these releases on our foreign policy described as a meltdown, as a game-changer and so on ... Is this embarrassing? Yes. Is it awkward? Yes.”
—Bob Gates, US Secretary of Defense, 2010

“The whole weighty book is a missile aimed at breaking the plate glass of US diplomacy and revealing its motivations.”
—Sydney Morning Herald