Minarets in the Mountains: A Journey Into Muslim Europe (Paperback) 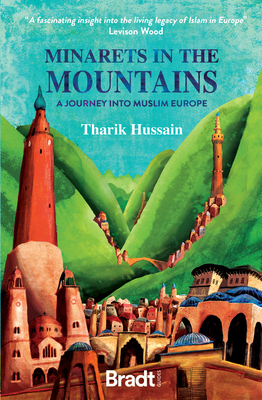 Minarets in the Mountains: A Journey Into Muslim Europe (Paperback)


On Our Shelves Now at:
A magical, eye-opening account of a journey into a Europe that rarely makes the news and is in danger of being erased altogether. Another Europe. A Europe few people believe exists and many wish didn't. Muslim Europe. Longlisted for the Baillie Gifford Prize for Non-Fiction 2021. Writer and documentary-maker Tharik Hussain sets off with his wife and young daughters around the Western Balkans, home to the largest indigenous Muslim population in Europe, and explores the regions of Eastern Europe where Islam has shaped places and people for more than half a millennium. Encountering blonde-haired, blue-eyed Muslims, visiting mystical Islamic lodges clinging to the side of mountains, and praying in mosques older than the Sistine Chapel, he paints a picture of a hidden Muslim Europe, a vibrant place with a breathtaking history, spellbinding culture and unique identity. Minarets in The Mountains, the first non-fiction account by a Muslim writer on this subject, explores the historical roots of the current tide of Islamophobia. Tharik and his family learn lessons about themselves and their own identity as Britons, Europeans, and Muslims. Following in the footsteps of renowned Ottoman traveller Evliya Celebi, they remind us that Europe is as Muslim as it is Christian, Jewish or pagan. Like William Dalrymple's In Xanadu, this is a vivid reimagining of a region's cultural heritage, unveiling forgotten Muslim communities, empires and their rulers; and like Kapka Kassabova's Border, it is a quest that forces us to consider what makes up our own identities, and more importantly, who decides?
Tharik Hussain is affiliated as a fellow with the Centre for Religion and Heritage and is viewed widely as a specialist on Muslim heritage and culture, especially across the western hemisphere. Tharik's previous work has often served to decolonise authorised and popular religious and cultural histories and narratives. He is the creator of Europe's first Muslim heritage trails, he edited a special revival edition of the historic British Muslim journal The Islamic Review. He frequently hosts lectures and talks on Muslim heritage and history and has even helped to develop a Muslim-Jewish heritage trail with the University of Oxford and JTrails. Tharik has also produced award-winning radio on America's earliest mosques and Muslim communities and written a chapter about encountering the indigenous Muslims of Romania in the book The Ordinary Chaos of Being Human; Travels from Many Muslim Worlds. He is the author of several travel guides for Lonely Planet, including Saudi Arabia, Bahrain and Thailand, where again he is viewed as an expert on Muslim culture and Muslim travel. Tharik has been named one of the UK's most inspiring British Bangladeshis and is an advisor to a number of heritage projects. His travel guide to Saudi Arabia has been shortlisted for a Travel Media Award and he has an MA in Islamic Studies and a BA(hons) in Media and Cultural Studies.